Emerging Songstress Carly Jo Jackson To Be Featured On Next Happy Hour With The Galleria Free Virtual Series
Thursday, 06/04/2020 – 05:00 pm – 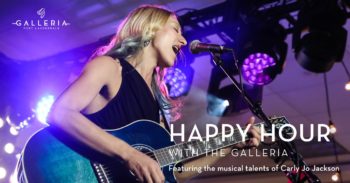 The Galleria at Fort Lauderdale, recognized as Broward County’s premier shopping destination, has announced emerging songstress Carly Jo Jackson as its next featured performer on Happy Hour with The Galleria, a virtual music series, scheduled for Thursday, June 4, at 5 p.m. on Facebook Live.

With a voice filled with grit and soul, Carly Jo Jackson brings the heat of the Florida sunshine to all she does. She has a vocal tone that is as infectious as her charismatic stage presence. She caught the attention of some big names in the music and entertainment business, opening shows for Michael McDonald (who also provided vocals on her recent EP), Kenny Loggins and Dennis Quaid and serving as a musical inspiration to Jeff Bridges who recently featured her on his Sleep Club website. Other notable performances include her 2014 appearance on America’s Got Talent, where she appeared in two televised episodes and advanced to Judgement Week; performing as an Emerging Artist at 2018’s Summerfest; singing backup vocals to Kenny Loggins at 2019’s Hawaii Songwriters Festival; performing at the renowned 30A Songwriters Festival along with Jason Isbell, Brandi Carlile, Shawn Mullins, Livingston Taylor and more; opening a San Francisco 49ers game; and winning the 2015 Belk Southern Musician Showcase. In late 2019, she released her EP Au Naturel, produced by Chris Pelonis and Lost Coast Records and distributed by Jimmy Buffet’s Cherry Bomb Records.

Launched in April on Facebook Live, Happy Hour with The Galleria has successfully entertained thousands in the local community during the COVID-19 quarantine. Jackson will join previous Happy Hour with The Galleria virtual music performers Alexander Star, The Tim Charron Band and Tori Rossi Music and WILL PLUS. These archived recorded livestream performances can be found at facebook.com/GalleriaFtLauderdale.

For additional upcoming virtual events and information about The Galleria at Fort Lauderdale, please visit facebook.com/GalleriaFtLauderdale. Patrons may also call (954) 564-1036 or visit www.galleriamall-fl.com.