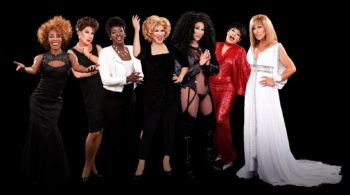 In response to an overwhelming demand, “ICONS • The Art of Celebrity Illusion” has added a second show on Saturday, August 28, at 8 p.m. at Mizner Park Cultural Center. Tickets are already flying fast for this spectacular experience that boasts a cast of jaw-dropping celebrity illusionist female impersonators who bring famous classic stars to life with uncanny detail as produced and created by South Florida’s drag impresario Nicole Halliwell (TLC’s I am Jazz, America’s Got Talent).

As evidenced by its recently sold-out first evening and previous packed engagements, “ICONS” has proven to be an audience favorite with great reviews heralding its unforgettable
nostalgia experience. Show-goers can sing along with meticulously recreated favorite classic stars and songs from Barbra Streisand, Cher, Bette Midler, Judy Garland, Whitney Houston, Gladys Knight, Liza Minelli, and additional performances from stars including Etta James, Totie Fields, Ella Fitzgerald and more – all on one stage!

ABOUT NICOLE HALLIWELL
With a 15-year career spanning venues across the country, Nicole Halliwell is the go-to for all things drag in South Florida. The most frequently hired drag personality in the state for the last five years, Halliwell produces, performs, manages, and emcees more than 30 shows per month. Responsible for the five largest drag concepts in Florida – Hilariously Inappropriate Drag Queen Bingo, Queenz The Drag Experience, “ICONS • The Art of Celebrity Illusion”, Hocus Pocus Live, and #DRINKNDRAG plus countless special events, she is no stranger to building extravagant and unforgettable entertainment showcasing her irreverent observational humor, side-splitting one-liners and unrelenting wit. When away from the local stage, Nicole has been seen on the small screen (America’s Got Talent, I Am Jazz, Entertainment Tonight, Deco Drive), in print
(Instinct, New Times, Daily Mail), and entertaining audiences at mega-fan pop culture conventions. She has also been featured as the face of Hard Rock International’s Pride Campaign. Learn more about Nicole at www.nicolehalliwell.com.

ABOUT MIZNER PARK CULTURAL CENTER
Since its opening in 2008, the Mizner Park Cultural Center has become a focal point for live entertainment and theater in South Palm Beach County. Recognized for its incredible location at the south end of Mizner Park in Boca Raton, the theater features intimate sightlines and a state-of-the-art sound and light system. The location within the upscale Mizner Park shopping center is perfect to grab a bite to eat before the show, stroll the sidewalks and enjoy the many wonderful shops and boutiques surrounding the theater. The Mizner Park Cultural Center is truly a remarkable venue that hosts events for all tastes. A memorable evening awaits at Mizner Park Cultural Center located at 201 West Plaza Real in Boca Raton, just a short drive from Fort Lauderdale, Delray Beach, Boynton Beach, Lake Worth, Manalapan, Lantana, and West Palm Beach. For more information and ticket information, call (844) MPCC-TIX or (844) 672-2849 or visit miznerparkculturalcenter.com.