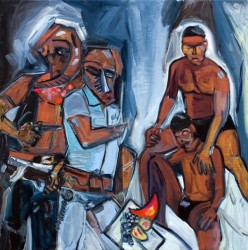 The Western art world has ushered in an era of post-identity, fueled in part by a
need to move beyond the polarizing debates that reached a frenzy in the early
1990s. However, fundamental questions of the role that identity does or does
not play in artistic meaning remain unresolved. Mette Tommerup’s new series
of paintings begin to ask us to see differently. Drawing as much on the still life
tradition as images found on the Internet, her paintings depict innocuous,
inanimate objects (from vegetables to garden gnomes) that paradoxically
double as sexually and racially charged subjects. Object or Subject?
Her works stubbornly refuse to answer this question by instead engendering in
her viewers a condition of anxiety that denies facile categories of identity.