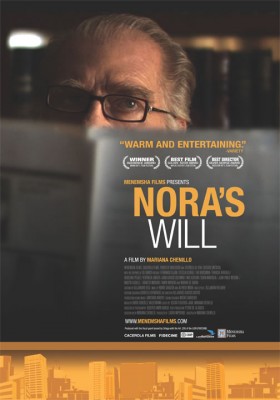 Mexico’s Best Picture of the Year is now playing in Miami! “Nora’s Will” (Cinco Dias Sin Nora) has been drawing big crowds and rave reviews all over the world, and is now playing exclusively in South Florida theaters. Winner of 7 Ariel Awards (Mexico’s Academy Awards), including Best Picture, Best Actor and Best Original Screenplay, the film by first-time writer/director Mariana Chenillo also won the Audience Award at the 2009 Miami International Film Festival. Don’t miss your chance to see this incredible film!

Synopsis: Nora had a plan. It would bring her ex-husband, Jose (Fernando Lujan), and the rest of their family together for one last magnificent Passover feast. But there is a flaw in her plan- a mysterious photograph from the past, hidden under the bed, which leads Jose to re-examine their relationship and rediscover their undying love for each other.

For more info and to watch the film’s trailer, visit www.menemshafilms.com.