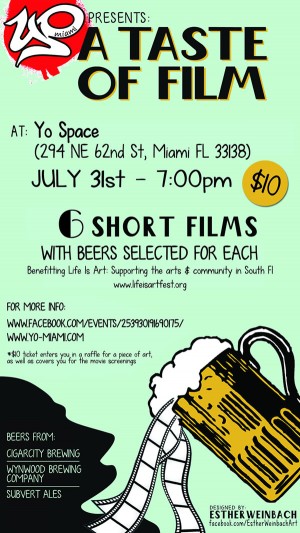 Yo Miami invites you to quench your thirst with A Taste of Film:
Combining two of our favorite things, beer and movies, we’re taking you on a flight of fancy that will showcase local film makers’ short films and pair each one with a beer that reflects the movie’s central theme.

We’ll have our very own resident beer expert on hand sharing some background on each brew as it’s served in between each short so that you can see why we paired them.

Buy a ticket to the short film showcase for just $10 and we’ll take care of the beers/refreshments, music and everything else you could possibly want in conjunction with watching movies and discussing them afterwards. So not only do you get a great experience checking out some local talent on the screen but you get a nice buzz to boot.

A percentage of the proceeds will be donated to Life Is ArtÂ the nonprofit organization whose mission is to “promote and support the arts and community in south Florida through events and education”.

Your $10 ticket also doubles as a raffle ticket, and the winner will get a custom piece of Yo Art.

*Screenings will start around 7 and there will be ping pong and other shenanigans for you to take advantage of afterwards.

Just added, we have a special welcome home show by Mista Spoz, even though he’s landing in Miami the day before after a 6 month stint in Israel: Youtube Promo

Just just added, our friends at Los Chamos food truck will be outside serving up their drool-inducing empanadas and arepas!