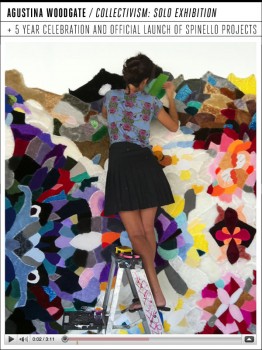 Anthony Spinello announces – Spinello Projects, a re-imagined curatorial/creative endeavor marking five influential years in facilitating the cultural development of Miami, its emerging art scene and beyond. On April 9th, 2011, Spinello will celebrate the milestone by proudly presenting the highly anticipated “group” installation, Collectivism, by Spinello’s first-ever represented Artist, Collaborator, and International Projector, Agustina Woodgate. Collectivism is a multimedia collection and conversation among Woodgate’s most significant works to date. This will be Woodgate’s forth solo exhibition with Spinello.

Agustina Woodgate’s work reminds us that all corporeal entities are interconnected with themselves and each other. Her practice investigates how stories, rituals, and traditions transform our relationships with the objects and places around us. This being-in-relation is a way of perceiving, a mode of moving, and a narrative of global truths designed by cultural fictions. Collectivism presents Woodgate’s evolution by moving its audience towards a collective future, that is integrated, involved, inclusive, and in continual process.

Woodgate explains, “I create art that fosters exchanges between people rather than encounters between a viewer and object. Through these exchanges, meaning is elaborated collectively, rather than in the space of individual consumption.”

She creates responses to social narratives through situations that unveil the tensions between the natural-becoming-unnatural and the unnatural-becoming-natural. Woodgate’s work discovers illogical, surreal scenarios from otherwise realistic or “normal” settings, revealing unconscious transience in beliefs and behaviors between these two worlds.

Collectivism includes pivotal early career works such as “Changes” to Woodgate’s most recent monumental accomplishment to date, “No Rain No Rainbows”.