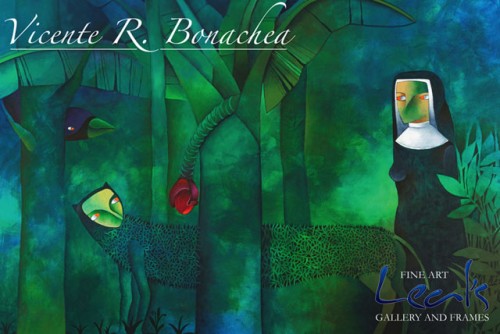 Leal’s Gallery is pleased to present the fist solo exhibition of Cuban artist Vicente R. Bonachea at the gallery. The opening reception will take place on Friday, February 19th, 2010 from 7:30 to 11:30 p.m.
Vicente R. Bonachea graduated from San Alejandro Academy in Havana, Cuba in 1976. Since then, he has worked as an artist, designer and educator at several prestigious institutions in Cuba such as the Instituto Cubano de Arte e Industria Cinematografica (ICAIC), the Instituto Politecnico de DiseÃ±o Industrial and the Escuela Elemental de Arte Paulita Concepcion, etc. He is also a member of the Union of Writers and Artists of Cuba (UNEAC).
During his long and fruitful career, Bonachea has illustrated books for children and young adults in Cuba and abroad. In addition, several of his Murals can be seen in the streets of Havana, Varadero, Villa Clara and other Cuban cities.
Bonachea has exhibited his work extensively in countries such as Cuba, Holland, Belgium, Switzerland, Sweden, Costa Rica, France, Austria, Mexico, Finland, Dominican Republic, Pakistan, Sri Lanka, Japan, China, South Korea, Spain, United States, Canada and Brazil.
Leal’s Gallery
1555 SW 8th Street
Miami, FL 33135
Ph: 305.642.3133
www.lealartframe.com
For more information about local openings and events, please visit www.miamiartguide.com