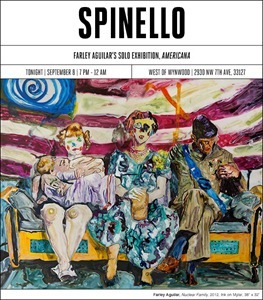 Americana features a suite of ink on mylar paintings which depict the struggle of the American psyche. Aguilar explains, "There is a very tense relationship between individuals and the society, community, or subculture they belong to. Even though the paintings are dated by a historical period, they show traces of their past and point to the future." Characters are awkward, grotesque and disfigured; many times a violent act has just happened or is about to occur. Elements of classical mythology are selectively inserted throughout Aguilarâ€™s work, nodding to stylistic modes of German Expressionism.

Aguilarâ€™s work communicates sensations of danger, dread and emotional volatility filtered through the psychological wavelengths of the â€˜mob mentalityâ€™. "American culture is obsessed with violence and the images in this new body of work reflect this notion," states Aguilar. "Violence is a clear eruption of frustration, fear and anxiety within an American moral, conservative, psyche that explodes in terror when confronted with the unknown."

In a constant state of searching for truth, Aguilar highlights the possibilities of attaining ultimate knowledge: like Faust, enlightenment leads to self-destruction while ignorance remains blissful. His colors and subjects reflect the full scale of human mortality, destined for a glorious demise.