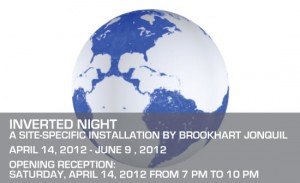 Brookhart Jonquil was born in Santa Cruz, California 1984 and lives and works in Miami, Florida. Jonquil received his MFA from the School of the Art Institute of Chicago in 2010, and his BFA and BA (in Art History) from the University of Arizona in 2007.

By using principles of perception and optics, Jonquil’s sculptures and installations create a dialog between the physical and the immaterial. Inverted Night presents an environment in which a large retro-reflective painting sublimates the far wall into light, evoking limitless space, while scattered black stars become voids within a blinding night sky.

The constellations depict the sky as it was at the moment of the painting’s creation, cataloging a time and place. Blurring the distinction between painting and installation, the space of the painting extends forward to the bank of flood lights that illuminates it, occupying the entire room.

In front of the painting stands a large globe divided into five sections by mirrors. As viewers walk though the room, they see only a part of the globe at a time, which combines with its reflections to create Rorschach patterns of continents. The always-political map becomes complicatedâ€“ countries transform into the viewer’s subjective projections, on a planet that is more mirage than matter.