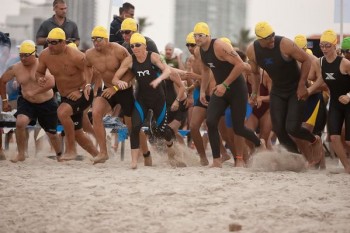 Participants from around the world will travel to South Beach for what has become one of the top athletic events of the year in South Florida. At 6:55 a.m., the International Distance Race will kick off with an invigorating 1.5K ocean swim, a 40K bike over Miami Beachâ€™s causeways, and conclude with a 10K run alongside Miami Beachâ€™s famous Art Deco District. At 7:40a.m., participants in the Classic Distance Race will hit the beach for a half-mile ocean swim, 19-mile bike and four-mile run. Both races will make their grand finish on the warm and smooth sands of South Beach.

â€œWith the success of last yearâ€™s Nautica South Beach Triathlon, we are pleased to welcome back our loyal competitors, along with a new group of dedicated athletes, triathletes and paratriathletes, as they prepare to take on the challenging journey ahead, â€œ said Karen Murray, President of NauticaÂ®. â€œSouth Beach continues to be the perfect destination for the competition and we are excited for this yearâ€™s participants to make it an event to remember.â€

This year, for the first time, the Nautica South Beach Triathlon will be a part of The Life Time Fitness Triathlon Series Race to the Toyota Cup, an internationally-renowned series for both professional and amateur athletes that is made up of seven of the most prominent international-distance triathlon events in the United States. In the professional series, the fastest endurance athletes on the planet compete for points across America in pursuit of the Toyota Cup, in addition to one of the richest prize purses in the world. Accordingly, the most accomplished Elite amateurs compete for the Elite Amateur Championship. At the amateur level, top age group athletes from each race will be eligible to compete for their respective Amateur Championships at the Toyota US Open Triathlon in Dallas, Texas on October 2, 2011.

â€œFor the past four years, weâ€™ve teamed up with Nautica to bring together athletes from around the globe to swim, bike and run in one of the most renowned cities in the United States,â€ said Michael Epstein, President of MESP, Inc. â€œIt is with great excitement that we welcome this event back to Miami Beach and continue toward our goal of promoting healthy bodies and raising money for an amazing cause.â€

ABOUT NAUTICA:
Founded in 1983, NauticaÂ® is a leading global lifestyle brand ranging from menâ€™s, womenâ€™s and childrenâ€™s apparel and accessories to a complete home collection. NauticaÂ® products are refined casual classics inspired and energized by the water that are always crisp, clean and distinct. Today NauticaÂ® is
available in more than 60 countries with more than 200 NauticaÂ® branded stores worldwide. In 2003, the
Company was acquired by VF Corporation, a global leader in branded lifestyle apparel with more than 30 brands, including Wrangler, The North Face, Lee, Vans, Nautica, 7 For All Mankind, Eagle Creek, Eastpak, Ella Moss, JanSport, lucy, John Varvatos, Kipling, Majestic, Napapijri, Red Kap, Reef, Riders and Splendid. For additional information, please go to www.nautica.com and www.vfc.com.

ABOUT ST. JUDE:
St. Jude Childrenâ€™s Research Hospital is internationally recognized for its pioneering work in finding cures and saving children with cancer and other catastrophic diseases. St. Jude is the first and only pediatric cancer center to be designated as a Comprehensive Cancer Center by the National CancerInstitute. Founded by late entertainer Danny Thomas and based in Memphis, Tenn., St. Jude freely shares its discoveries with scientific and medical communities around the world. St. Jude is the only pediatric cancer research center where families never pay for treatment not covered by insurance. No child is ever denied treatment because of the familyâ€™s inability to pay. St. Jude is financially supported by ALSAC, its fundraising organization. For more information, please visit www.stjude.org.

ABOUT LIFE TIME FITNESS TRIATHLON SERIES:
In groundbreaking fashion, the Life Time Fitness Triathlon Series was launched in 2006 and created the first-ever connection among several of the most prominent international-distance triathlon events in the United States. Throughout the Series, an international field of professional triathletes battle to earn points and a chance to win the coveted Toyota Cup. For more information, visit the Life Time Fitness Triathlon Series Race to the Toyota Cup website, racetothetoyotacup.com.