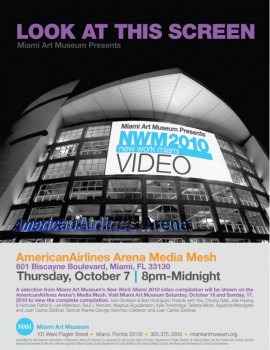 Miami Art Museum will present a selection of videos created by local artists, in conjunction with its current New Work Miami 2010 exhibition, on the AmericanAirlines Arenaâ€™s exterior Media Mesh, a digital LED screen on the facilityâ€™s 34,000 square foot facade, on Thursday, October 7, 2010, from 8pm until midnight. The public screening selection provides a sneak peak at the complete compilation, which will be shown at Miami Art Museum on a loop throughout the final weekend of New Work Miami 2010, Saturday, October 16, and Sunday, October 17, 2010.