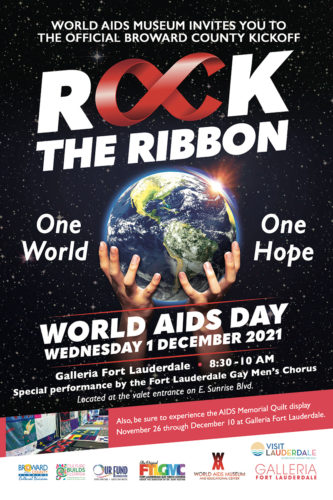 World AIDS Museum and Educational Center (WAM) and Galleria Fort Lauderdale will kick off World AIDS Day on December 1 with Rock the Ribbon, a public event designed to raise awareness and voices in unison for global health!

Rock The Ribbon will commence at 8:30 a.m. with a gathering of elected officials including City of Fort Lauderdale Mayor Dean Trantalis, fellow HIV-related agencies and other stakeholders. Special performances by the Fort Lauderdale Gay Men’s Chorus under the direction of Gary Keating, Camie Liz and DJ Aulden Brown will add flair to rock the crowd. The event will take place outdoors under the covered valet parking entrance. Attendees are encouraged to register in advance at WAM’s Rock The Ribbon page.

The public is also invited to view a portion of the AIDS Memorial Quilt which portrays powerful stories of activism, love, healing, hope and remembrance to connect the story of HIV/AIDS to the important issues impacting our nation, today. The quilt is on display through Dec. 10.

According to National AIDS Memorial, 40 years into the AIDS pandemic, more than 700,000 lives in the U.S. have been lost to AIDS and more than 1.1 million people live with HIV and an estimated 1 in 7 people do not know they have HIV. In the last figures reported in 2018, Black/African American gay and bisexual men account for the largest number of new HIV diagnoses.

The AIDS Memorial Quilt was conceived in November of 1985 by long-time San Francisco gay rights activist Cleve Jones. On October 11, 1987, the Quilt was displayed for the first time on the National Mall in Washington, D.C., during the National March on Washington for Lesbian and Gay Rights. It covered a space larger than a football field and included 1,920 panels. Today, the AIDS Memorial Quilt is an epic 54-ton tapestry that includes nearly 50,000 panels dedicated to more than 105,000 individuals. It is the premiere symbol of the AIDS pandemic, a living memorial to a generation lost to AIDS and an important HIV prevention education tool. With hundreds of thousands of people contributing their talents to making the memorial panels, and tens of thousands of volunteers to help display it, the Quilt is considered the largest community arts project in history.