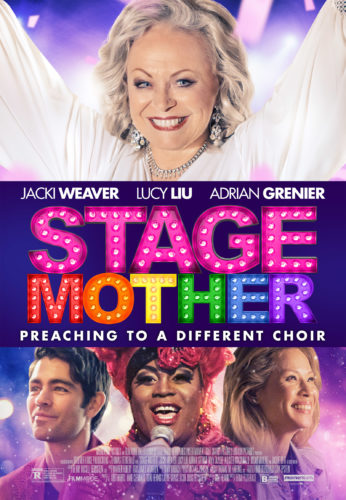 Stage Mother, a new comedy-drama starring Oscar-nominated Jacki Weaver (Silver Linings Playbook, Animal Kingdom), Adrian Grenier (Entourage, The Devil Wears Prada) and Emmy-Nominated Lucy Liu (Charlie’s Angels, Elementary, Ally McBeal), will kick-off the 22nd edition of the OUTshine LGBTQ+ Film Festival on Thursday, August 20, at 7 p.m. This special OUTshine Opening Night Drive-OUT preview at Dezerland Drive-In in North Miami (the film will be released to the public on August 21) will launch a celebration of diversity and equality with 80 thought-provoking films from 20 countries, (many never-seen-before and not available on any streaming platform) accessible via 44 screenings available from August 20 – 30, 2020. A livestreamed Q& A session will follow the film.

Stage Mother tells the story of Maybelline (Jacki Weaver), a conservative Texas church-choir director who inherits her recently deceased son’s drag club. She surprises her closed-minded husband and everyone else she knows by moving alone to San Francisco to save the club from bankruptcy. In this raucous, racy new environment, she begins to open-up and finds new meaning for her life, even becoming a mother-figure to the club’s flamboyant performers. In addition to Adrian Grenier and Lucy Liu, the film also stars, Mya Taylor (Tangerine) and the legendary Jackie Beat.

In addition to Stage Mother, this year’s virtual line-up includes Centerpiece film The Goddess of Fortune (La Dea Fortuna) (Italy), Drama-Comedy on August 26 at 7 p.m.; a Ladies Shorts Package Night on August 22 at 5 p.m., a Men’s Shorts Package Night on August 23 at 5 p.m.; a South Florida Speaks – Shorts Program on August 30 at 5 p.m., Closing Night film Single Street (Singel 39) (Netherlands), Comedy on August 30 a 7 p.m.; and two FREE Community Showings – Letters to Eloisa (USA), Drama on August 22 at 3 p.m. and TRANSformations – a Trans Shorts Package on August 29 at 3 p.m. A full list of films and descriptions can be found at outshinefilm.com/films/program. The festival will also host additional livestreamed special events with cocktail happy hours, talent and more Q & A sessions.

Presenting sponsors of The 22nd edition of the OUTshine LGBTQ+ Film Festival are Gilead Sciences and Miami-Dade County.

Tickets for the OUTshine Opening Night Drive-OUT preview of Stage Mother, at the Drive-In Theater at Dezerland Park (14401 NE 19th Avenue, North Miami, FL 33181) are $40 per car and are available via outshinefilm.com/buy-tickets. Prices for additional exclusive festival streaming films are $12 each and value packages range from $60 to $350 and can also be purchased at outshinefilm.com/buy-tickets.