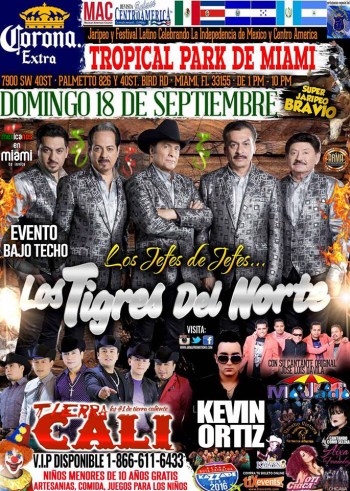 Come to this Mexican festivity in Miami where NorteÃ±o superstars and Fair favorites Los Tigres Del Norte, along with Tierra Cali, Kevin Ortiz, Grupo Mojado, Rancho Victoria, Kazzabe, Aixa Fernandez, Notichica, Rebelion Chicana will be performing on September 18 at Tropical Park. Presented by Arma Promotions and supported by MexicanosenMiami.net
Los Tigres Del Norte is equivalent to the Van Halen of the United States! Their music style is a modern take on norteÃ±o with traditional cumbia, bolero, and rock rhythms. They are lnown for penning corridos (ballads) about social issues. The group has sold over 32 million records, won six Grammys, six Latin Grammys, received a star of the Hollywood walk of fame, and are currently ranked 15th on the list of â€œThe 30 Most Influential Latin Artists of All Timeâ€ by Billboard magazine.
Bring your hat and boots and check this unique festivity, where there will be a horse show performance, food court, kids playground and lots of traditional â€œquebraditaâ€ dancing.
Get your tickets at http://bit.ly/tigresdelnortemiami2016