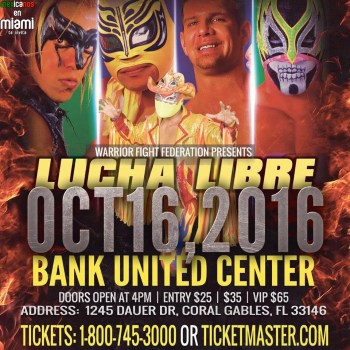 Action-Packed, High-Flying Mexican Wrestling will be fighting in Miami on October 16th at Bank United Center. Come see the amazing â€œLucha Libreâ€ presented by Warrior Fight Federation (WFF). This is a Pro Wrestling event for the entire Family, get your tickets today at http://bit.ly/LuchaLibreEnMiami

In case you donâ€™t know much about Lucha Libre, here are some specifics
â€œLa Lucha Libreâ€ is characterized by colorful masks, rapid sequences of holds, maneuvers and unparalleled acrobatic skills. It is similar in many ways to the form of wrestling that inspired it — American professional wrestling. Both forms are full of colorful characters and outlandish story lines, and the rules in both types are very flexible and loosely enforced. In fact, lucha libre translates to “free fighting.

The most obvious thing that sets lucha libre apart is that almost every major Mexican wrestling star wears a mask and doesn’t use his real name. â€œLa mascaraâ€ plays an important part of the storyline, and can also provide some anonymity in a country enthralled by the sport of Mexican wrestling. Therefore its following, both in Mexico and other countries, has made it the most popular sport after soccer in a country of 100 million people, and an integral part of pop culture.

So you are invited to live the experience true Lucha Libre and see the finest and most daring spectacle. An event recommended by Mexicanos en Miami. Learn more about WFF at http://www.warriorfightfederation.com/