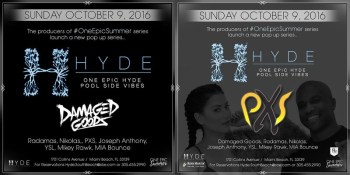 #OneEpicSummer event brand continues from a sucessfull 2016 summer seires launch which hosted all of Miami’s top local Dj’s & promoters from all the top local venues in nightlife for the first time ever. This series included swim week fashion shows with over 10 designers, NBA Hall of famer Soriee, hometown Hollywood actor birthday bash, top EDM dance music artist Rozes from Chainsmokers, live performance from top latin billboard artist, world known Djs such as Robbie Rivera & Caked up, along with top models, NBA stars, NFL stars, top musical artists & Hollywood actors.
Join us for the next series titled #OneEpicHyde Pool Side Vibes which continues this on going series with Miami’s top Dj’s at Hyde Beach at The SLS Hotel Sunday October 9th, 2016 for its once a month pop-up series.