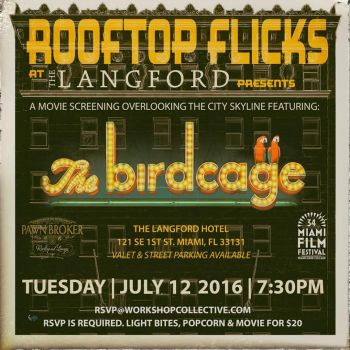 Spend a night amongst the stars and Downtown Miami’s famous skyline snuggled up with box of popcorn and a great flick. The Langford Hotel invites guest and locals on Tuesday, July 12 at 7:30PM for the launch of Miami Rooftop Flicks, a new monthly series of rooftop movie screenings at The Langford Hotel with Miami Film Festival.
This June The Langford and The Miami Film Festival present a showing of The Birdcage. In this remake of the classic French farce “La Cage aux Folles,” a gay cabaret owner and his drag queen companion agree to put up a false straight front so that their son can introduce them to his fiancÃ©e’s right-wing moralistic parents starring Robin Williams, Nathan Lane and Gene Hackman. The film will be accompanied by popcorn and light bites provided by the hotel’s very own Pawn Broker, priced at $20 per person. Cocktails and additional bar bites can be purchased for an additional cost at Pawn Broker.