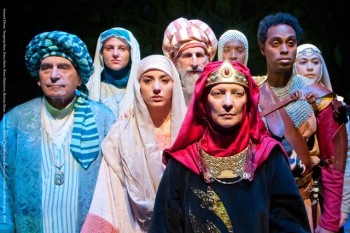 Featured performers at this free, family-friendly community celebration, inspired by medieval CÃ³rdoba, will include a 15-member drum ensemble from Urban Tribal Project, directed by Miami Theater Centerâ€™s Resident Composer Luciano Stazzone (who has performed with musicâ€™s most illustrious starts, including Gloria Estefan, Shakira, Ludacris); an eclectic mix of street performers in period costumes, representing historical figures from medieval CÃ³rdoba, who will interact with the crowd; and a two-person hand balancing act, as well asflamenco and belly dancers, stilt performers, jugglers, a contortionist, an authentic Middle Eastern band, and a parade that will showcase the cast of MTCâ€™s world premiere Everybody Drinks the Same Water, as well as food trucks and face painting.

Everybody Drinks The Same Water â€“ Saturday, May 3 through Sunday, June 1 at MTC
The show begins as a Christian King has just taken control of the city of CÃ³rdoba, ending more than 500 years of Islamic rule. Moments after entering the castle, the new ruler drinks a glass of water and becomes violently ill. His family accuses the Muslim community of attempting to assassinate him, but the picture gets murkier with reports of Jews, Muslims, and other Christians getting sick. Evidently, the entire public water supply has been poisoned. Fear, anger, and suspicion infect the town. Frustrated by their eldersâ€™ inability to see beyond the finger pointing, three teenagers of different faiths work together to unravel the mystery. Add to the mix inter-religious flirtations with potentially fatal consequences, and you get an engaging look at the past that teaches powerful lessons about the present.

Everybody Drinks The Same Water is the fifth MTC production by the stellar, local creative team comprised of writer-director Stephanie Ansin, writer-designer Fernando Calzadilla, composer-sound designer Luciano Stazzone, and choreographer Octavio Campos. They have become renowned for creating original productions that have earned MTC its status as a leader in producing sophisticated, visually stunning, innovative theatre with an international focus that is relevant to South Floridaâ€™s multicultural community. Last season, the creative team astonished critics and audiences alike with their imaginative adaptation of Chekhovâ€™s Three Sisters (2012). They have also worked together to adapt Aliceâ€™s Adventures in Wonderland (2008) and to create the world premieres The Red Thread (2011) and Inanna and the Huluppu Tree (2009). MTCâ€™s significant contributions to South Floridaâ€™s cultural legacy are evidenced by having received two highly competitive awards from the Miami New Times, including a â€œBest of Miamiâ€ Award in 2013, and â€œBest New Theaterâ€ and â€œBest Production for a New Companyâ€ for its adaptation of Chekhovâ€™s Three Sisters.