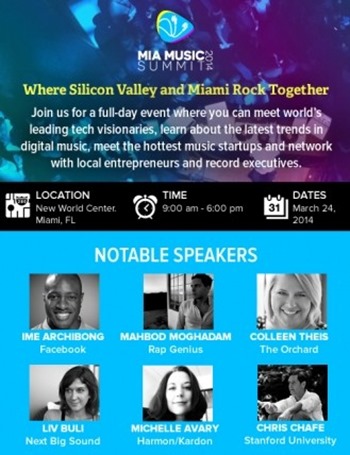 Tickets are available until March 9 for $199; $299 thereafter.
Students with a valid ID can purchase tickets for $99.
www.mms.co

The MIA Music Summit will bring together innovative music and tech entrepreneurs, record executives, music journalists, hackers and musicians to share and build new ideas in the digital music space. MIA Collective will host the event with support from the John S. and James L. Knight Foundation.

The inaugural event will be held at New World Center in Miami Beach. The conference aims to establish Miami as a hub for digital music startups by connecting the South Florida technology and music communities with each other and global leaders. In addition to Knight, the event is supported by Gold Sponsors Senzari and Choose Digital, and Silver Sponsors .CO, SESAC Latina and Mobile Roadie.

â€œThe MIA Music Summit is another reflection of the diversity of budding entrepreneurs contributing to the momentum of Miamiâ€™s startup community,â€ said Matt Haggman, Knight Foundation program director for Miami. â€œBy showcasing and fostering local talent, the event provides an incentive for further growth, while attracting new ideas to this emerging space.â€

The summit will host speakers from prominent companies including Cory Ondrejka, vice president of engineering at Facebook; Martin Varsavsky, founder of Fon; Eric Sheinkop, co-founder and CEO of Music Dealers; Mahbod Moghadam, co-founder of Rap Genius; Marc Zimet, Viacom vice president of music and talent; and Alfonso Perez-Soto, senior vice president at Warner Music. Discussions will address topics at the intersection of music and technology, such as crowd funding, Big Data, social media, music and branding, music licensing and next generation music hardware. Some of the hottest music startups from around the world, such as Splice, Wahwah Networks and Jukely, will also demo their projects. In addition, there will be high-tech music performances by Nagual Sounds, winners of Midemlabs 2014, and Stanford University’s Center for Computer Research in Music and Acoustics.

â€œWe are beyond thrilled to have been able to gather such an amazing lineup of speakers in the first edition of the MIA Music Summit,â€ said Demian Bellumio, a partner at MIA Collective. â€œIâ€™ve been developing Senzari into a globally recognized digital music leader from Miami, so it is very important to do everything I can to help this ecosystem evolve. There are a lot of building blocks in the community already, from tech entrepreneurs looking for big ideas, to record executives searching for talented engineers, and the MIA Music Summit could be the place where the right collisions can take place to spark creation of other future startups.â€

The MIA Music Summit will also host the MIA Music HackDay from March 22-23, which is open to technologists, engineers and programmers. The music hackathon will be held at The LAB Miami in Wynwood, which is a co-organizer of the event. Special prizes for the best use of APIs will be awarded from Choose Digital, MusicGraph, Senzari and 3scale. The hackathon will close with Miamiâ€™s first â€œStartup Battle of the Bands,â€ in which local startups will showcase their digital musical talents. Live music performances from a variety of Miami artists and others can be expected throughout the weekend.

Derrick Ashong of Fusion, the Miami-based Univision-ABC channel, will emcee the event. Ashong has joined forces with â€œMade in the Lab,â€ a new Miami-based advisory service for tech startups, and Stan Jakubowicz, an award-winning filmmaker, to create THINC (Technology in Harmony with Narrative and Creativity), a multiplatform series of town-hall conversations with leaders, artists and innovators. THINCâ€™s first guest will be Cory Ondrejka, who will be interviewed by Ashong at the event in a town-hall conversation format, which will be webcasted live. In addition, THINC will document Ondrejkaâ€™s experiences as he visits Miamiâ€”from judging the hackathon and interacting with the local developer community, to the in-depth town-hall conversation.

Support for the MIA Music Summit forms one part of Knight Foundationâ€™s efforts to attract talent and create new opportunities by strengthening Miamiâ€™s emerging community of entrepreneurs, startups and makers.

About MIA Collective
MIA Collective is comprised of a group of Miami entrepreneurs, angel investors and professionals active and committed to fostering the growth of Miamiâ€™s media, art and technology ecosystem. The goal of MIA Collective is to develop thought-provoking events that support the growth of this ecosystem by educating, inspiring, and facilitating networking opportunities for members of the community.