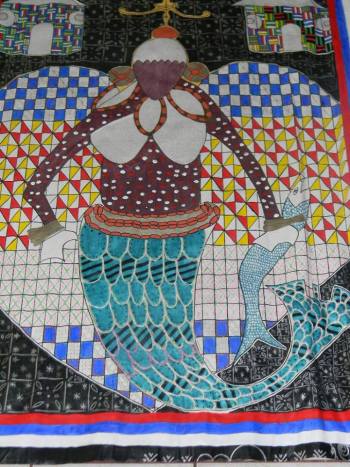 Ore Yeye Osun!
Join us at the Miami River on Tuesday July 3oth, as we Celebrate our upcoming â€œSACRED JOURNEYâ€ to Nigeria, for the August 23, 2013 World Osun Osogbo Festival and Pay Homage to the Goddess of the River. Osun Osogbo is the site of the Main Shrine to Osun, the River Goddess, whom traditionalists from many cultures in The Diaspora pay homage to.
Oshun, or Ochun (pronounced [É”ÊƒÃºn]) in the Yoruba religion, is an Orisha who reigns over love, intimacy, beauty, wealth and diplomacy. She is worshiped also in Brazilian CandomblÃ© Ketu, with the name spelled Oxum. She should not be confused, however, with a different Orisha of a similar name spelled “Osun,” who is the protector of the Ori, or our heads and inner souls. ochun relates mostly to woman but also man.

á»Œá¹£hun is beneficent, generous and very kind. She does, however, have a horrific temper, one which she seldom ever loses. When she does, it causes untold destruction. Oshun is said to have gone to a drum festival one day and to have fallen in love with the king-dancer Shango, god of lightning & thunder. Since that day, Shango has been married to Oba, Oya, and Oshun, though Oshun is said to be considered his principal wife.

All forms of socio-cultural developments have some attributes of celebration and thanksgiving to the Almighty Spiritual Force. Festivals are therefore regarded as important socio-cultural means of supplications to the Supreme Being, at most times through intermediaries according to different individualâ€™s belief. Consequently, the month of August of every year has become a unique month among the people of Osogboland. It is the month of celebration, traditional cleansing of the city and cultural reunion of the people with their ancestors and founders of the Osogbo Kingdom. The celebration of Osun Osogbo Festival is a period of stocktaking and assemblage of all sons and daughters of Osogboland and most especially Yoruba speaking people both in Nigeria and Diaspora.

The origin of the Festival according to historical records can be described as an account of the legendary encounter between the early settlers / founders of Osogbo with the Osun Osogbo deity. In about 1370AD the founder of Osogbo, Oba Gbadewolu Larooye and the great hunter Olutimehin settled in the sacred Osun forest to establish the kingdom and actualized a pact of association and togetherness with the River Osun deity. Since then Osogbo has remained peaceful, progressive and benevolent city without any ravage of war or pestilence. This pact of association, which is rekindled every year in the month of august, is the foundation of a cultural fiesta that has catapulted itself into world recognition as one of the largest tourist attraction in Nigeria.

The cultural celebration tagged Osun Osogbo Festival has a two-week programmed of events starting with the spiritual cleansing of the town. This is generally known as ÃŒwÃ²pÃ²pÃ², followed by OlÃ³jÃºmÃ©rÃ¬ndÃ­nlÃ³gÃºn which is the lightening of the centuries old 16-points lamp three days later. ÃŒborÃ­adÃ© â€“ the assemblage of all the crowns of past rulers (Ataojas) for blessings follows some four days later. The Festivalâ€™s Grand Finale showcases the cultural procession of the people to the Osun Grove.

Essentially, these activities with other associated onea are to springboard cultural tourism development in Osun state and generally in Nigeria. Despite the influence of western civilization, education and religion, the Festival has to a very large extent manifested its originality, authenticity and acceptability among nations worldwide. The Osun Grove was enlisted officially as a World Heritage Site by United Nations Education, Scientific and Cultural Organization (UNESCO) in Durban, South Africa to the joy of the people and the government of Federal Republic of Nigeria in July 2005.

Corporate sponsorship and individualâ€™s identification with any of the festival events will therefore be a rare opportunity to advance corporate relations, products and services patronage with the fulfillment of discharging corporate social responsibilities and national obligations to the Osogbo community, the Government and people of Nigeria.