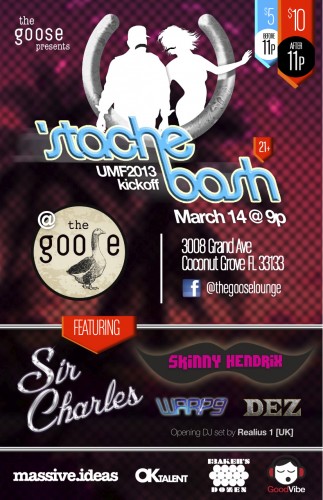 What better way to kick off the first weekend of WMC than with a little ‘stache?

The ‘Stache Bash is back for another night of good vibes, fresh music, and live art at Coconut Grove’s finest new nightclub, The Goose, featuring a newly renovated sound system and floor area.

SIR CHARLES
https://soundcloud.com/itssircharles
At just barely 21 years old, identical twin Charles Weinart aka Sir Charles has already made a lasting impression along the east coast. His most recent EP entitled VNS FLY TRP has been garnering worldwide support, including a feature on the popular blog, Real Trap. One of the tracks off the EP, â€œCa$h to the Ceilingâ€, has received over 26,000 plays in its first month. He has released music on Eliot Lippâ€™s record label, Old Tacoma, and played at a number of festivals including Camp Bisco, Buku, Impulse, Sonic Bloom, River Beats, V Elements and Bear Creek. Charles has played many shows in the Southeast region, opening up for artists such as Steve Aoki, Eliot Lipp, Bonobo, Pantyraid, Boombox and Paper Diamond.

SKINNY HENDRIX
https://soundcloud.com/skinny-hendrix
Brady Jacob, AKA Skinny Hendrix, is a DJ/Producer from Miami, Florida that is quickly turning heads in the EDM world. His fresh blend of electro, dubstep, moombah, trap, and more combined with his energetic and unfettered stage presence keeps dance floors in a frenzy all night long.

After graduating from the University of Miami with a major in Entrepreneurship, Skinny immediately focused his energy towards his passion for electronic dance music. While attending Scratch DJ Academy, his natural talent behind the turntables instantly garnered attention from his professors and colleagues. He then took to the road on a festival-hopping journey that culminated in an epic DJ set on stage at Bonnaroo. Now back in Miami, the buzz around Skinny Hendrix continues to swell each time he spins for a new crowd.

WARP9
https://soundcloud.com/warp99
Warp 9â€™s obsession with sound began a long time ago in a galaxy far, far away. It has since evolved through several different phases, taking many turns over the light years as they have shared in all sorts of musical adventures. Finally landing in Miami, Warp9 has united forces to decode the information beamed here from a distant star and deliver it to you through their music: spaced-out grooves served with a dose of galactic funk that will navigate you into uncharted territories.

Warp9 consists of Adam, a multi-instrumentalist and graduate from Berklee College of Music; and Jeff, an experienced controllerist and veteran DJ of over 12 years. When performing live, they incorporate a unique blend of live guitars, synths, DSP and DJâ€™ing. Warp9 has just released their first EP on JPod The Beat Chef’s label “Swing Set Sounds”. Stay Tuned!

Eric has performed 4 times at the world famous Ultra Music Festival and at Earthdance Music Festivals on both coasts. He has performed along side Visionary Painter Alex Grey. His music has appeared in several video productions and documentaries including â€œTemplayedâ€ a visual/music production which also features Electric Skychurch.

Special Thanks To:
Red Tens Creative