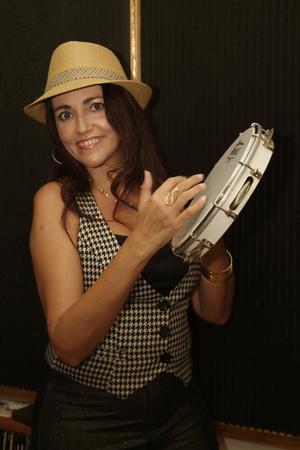 Everyone from her mother’s side was a musician. She is the great-grand daughter of the conductor and composer CUPERTINO DE MENEZES and grand daughter of the guitar player and composer MANUEL DE MENEZES. Cupertino, also a flutist, was a band member of a “choroâ€ group led by Callado Junior and Chiquinha Gonzaga, two of the most prominent musicians from this era. Manuel was partner – in music, adventures and “Bohemia – of the most important Brazilian composer in the early 30’s – Noel Rosa.

Rose graduated with a degree in Portuguese and Literature from the Federal University of Rio de Janeiro. As a student, she was involved in various theatrical productions with the group â€œA QUEM INTERESSA.â€

Rose Max performed extensively as a soloist with the vocal group AEQUALE under the direction of acclaimed-musical director ANDRÃ‰ PROTÃSIO. Gaining interest and respect locally, she started working with a number of different bands. One of her best experiences was performing at “CLUBE DO SAMBAâ€ (Samba Club) where she had a chance to learn with some of the big names of Brazilian music, such as Maestro Licinho, Neco, Antonio Carlos Tourinho, JoÃ£o Nogueira, and Roberto Ribeiro. She also started working as a session singer, recording jingles and background vocals, which led to the opportunity of backing up some of Brazil’ s most renowned singers.

Rose moved to Miami in October of 1993, where she has been continuing to grow and develop musically, and by keeping a constant performance schedule, she has become highly recognized in the Brazilian, Hispanic and American communities. She won the BRAZILIAN PRESS AWARD for the â€œBest Female Brazilian Singer Residing and Performing in the USAâ€ in 1997, 1998 and 2001.