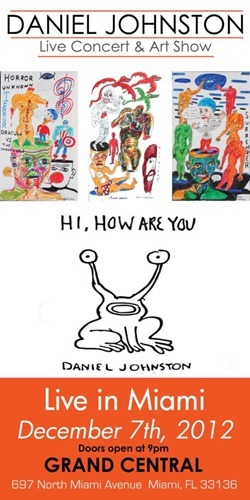 During this year Miami Art fairs Week, with, drawings at Wynwood walls and a concert + solo Art show @ Grand Central, long-time cult icon Daniel Johnston will entered the become a part of the Miami art movement. For anyone who had the slightest familiarity with his life and his work, the first question this Miami dÃ©but will provoke is not â€˜What does this say about the art world?â€™ but â€˜What does this mean for Daniel?â€™ Because of the many complicated feelings Johnston tends to inspire, concern is usually high on the list.

Johnston is severely mentally ill. Diagnosed as bipolar, frequently delusional, occasionally violent (he attacked his former manager with a lead pipe and once brought down his fatherâ€™s small plane, shutting off the engine mid-flight and throwing the keys out the window), heâ€™s spent his adult life in and out of institutions. He has managed to sustain himself through the care of friends and family, and through an absolute belief in his artistic calling. These days, physically wrecked by years of medication, tons of acid dropped in the 1980s and a lifelong diet of hamburgers, Coke and cigarettes, heâ€™s a hulking middle-aged childâ€“man living in small-town Texas in the care of his elderly, fundamentalist Christian parents.

But all of this is old news to anyone whoâ€™s followed his career as a remarkably successful musical outsider (or to anyone whoâ€™s seen The Devil and Daniel Johnston, Jeff Feuerzeigâ€™s 2005 documentary on his life). Johnston has been on hipster radar since the 1980s, when his DIY cassettes began making their way into the world. Singing in a shaky, plaintive warble, accompanying himself on rudimentary chord organ and guitar, heâ€™s recorded scores of naive and witty songs about superheroes, about the battle between good and evil, about lost love, loneliness and madness â€“ all weird and funny and intimate and tremendously catchy. And he has always drawn and painted as well, chronicling in twisted, cartoonish fashion his various obsessions and the characters that populate his interior world: Captain America, Casper the Friendly Ghost, Satan, a stalk-eyed frog named Jeremiah and a hollow-headed doppelgÃ¤nger called Joe the Boxer.

And 33 of his pieces with all of them will be here in Miami, rendered in pen, water colors and marker on notebook paper, curated by Pablo Gehr; with a preview in Wynwood walls Dec 6 and the main art show & concert at Grand Central Dec. 7 and 8th during art fairâ€™s week; alongside the work of 10 local artists making an homage show to Johnston, who will also collaborate by adding his characters in the canvases of the locals. Local Artists include The Concert organized by local event mogul AramÃ­s LoriÃ© will be the place to be and the one event to make a mark in the local art scene during this yearâ€™s Art Fairs week!