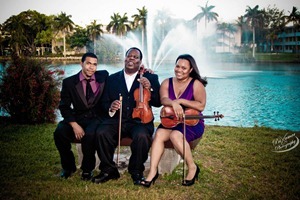 Concert tickets are $10 and are available online.

All proceeds from this concert will go towards Friends of Music Education for Haitiâ€™s initiatives to build Haitiâ€™s first professional music conservatory and performing arts center for children. Romel Joseph, the Juilliard-trained Haitian violinist who survived the devastating earthquake in Haiti on January 12, 2010, is the Executive Director of Friends of Music Education for Haiti. His remarkable ordeal captivated audiences around the world through numerous media reports in the Miami Herald, the Washington Post, London Times, CBS Evening News with Katie Couric, BBC, and CNN. Legendary musician, Stevie Wonder, honored Mr. Joseph by presenting him with his personal keyboard during a live interview on CNN.

Romel Joseph began his musical studies at the age of 13. In 1985, he was awarded a Fulbright grant to attend the Juilliard School where he received his masterâ€™s degree in violin performance. Upon his graduation, he returned to Haiti where he and his former wife later founded what was then â€œThe Victorian Schoolâ€ in 1991. In 1996, he relocated to Miami, Florida, where he founded Walenstein Musical Organization. Travelling frequently between Miami and Haiti, Mr. Joseph remained actively involved in the music and educational community. He later expanded Walenstein Musical Organization, creating Walenstein Symphony Orchestra. On January 12, 2000, The Victorian School was completely destroyed by fire caused by an electrical circuit. Within two years, it opened its doors with a new name — The "NEW" Victorian School. On January 12, 2012, Mr. Joseph was severely injured under The New Victorian School, which was completely destroyed by the notorious Haiti earthquake. This tragedy renewed his sense of mission, resulting in the creation of Friends of Music Education for Haiti. Mr. Joseph currently lives in both Port-au-Prince Haiti, and Miami, Florida, and is the founder of Walenstein Musical Organization, Walenstein Symphony Orchestra, and Friends of Music Education for Haiti. All three institutions are recognized as non-profit by the state of Florida and are 501(c)3 organizations.

Victoria Joseph began her violin studies at the age of three with her father, Romel Joseph. She received her Bachelorâ€™s in Music Performance from the University of Miami and has performed with a number of local music organizations. Ms. Joseph is currently involved with Walenstein Musical Organization, Walenstein Symphony Orchestra, The New Victorian School, and Friends of Music Education for Haiti.

Bradley Joseph began his musical studies on the violin at the age of three in 1995 under the auspices of his father, Romel Joseph. At the age of five, he added the piano to his musical training. Since that time, he has worked with several instructors including Micheline Laudun Denis of the Conservatoire National de Musique de Paris and the Ecole de Haut Perfectionnement Musical. In 2007, Mr. Joseph performed as guest solo artist with Walenstein Symphony Orchestra and in 2009 with the Holy Trinity Philharmonic Orchestra in Port-au-Prince, Haiti. Bradley is currently majoring in Economics and Piano Performance at Florida International University.

Friends of Music Education for Haiti, Inc., a non-for-profit organization, was created by Romel Joseph in light of the complete destruction of The New Victorian School in Port-au-Prince, Haiti during the January 12, 2010, earthquake with renewed energy and a new dream — to expand the music section of The New Victorian School into the creation of the first Haiti Performing Arts Center as his legacy to Haiti. FMEH will contribute to the development of music education and performance opportunities for the children, youth, and interested adults of Haiti. It will also help initiate musical training in all private and public schools throughout the country, explore Haitiâ€™s rich traditional music, and manage  the construction of the new Haiti Performing Arts Center.