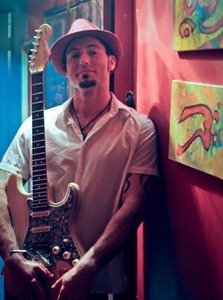 Aaron Lebos is one of the most in demand and versatile guitarists in South Florida doing everything from sessions, some touring, and gigs every night. Aaron started on classical piano at 5 winning classical state competetions then switching to guitar at age 11.
Graduating from the University of Miami Jazz/Studio Music Program, he then toured with Latin pop stars such as Christian Castro and Hector Montaner from 2003 until 2006. Since then he has focused more on local gigging and sessions and also his own jazz/fusion project. He also teaches each summer at The Young Musicians Camp at the University of Miami.
In 2010 he released two CDâ€™s, one a jazz standards album and the other an all original fusion/rock release. He has been a full-time professional musician since 2001. Look out for two more CDâ€™s in 2011 as well as more promotional shows in south florida as well as Costa Rica and Ecuador.