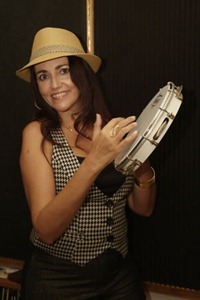 Born in Rio de Janeiro, Rose realized she had the gift of singing at a very early age.
Everyone from her mother’s side was a musician. She is the great-grand daughter of the conductor and composer CUPERTINO DE MENEZES and grand daughter of the guitar player and composer MANUEL DE MENEZES. Cupertino, also a flutist, was a band member of a "choroâ€ group led by Callado Junior and Chiquinha Gonzaga, two of the most prominent musicians from this era. Manuel was partner – in music, adventures and "Bohemia – of the most important Brazilian composer in the early 30’s – Noel Rosa.
Rose moved to Miami in October of 1993, where she has been continuing to grow and develop musically, and by keeping a constant performance schedule, she has become highly recognized in the Brazilian, Hispanic and American communities. She won the BRAZILIAN PRESS AWARD for the â€œBest Female Brazilian Singer Residing and Performing in the USAâ€ in 1997, 1998 and 2001.