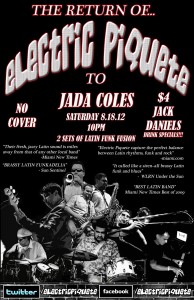 â€œBringing Electric Piquete back to Jada Coles represents our commitment to continuing to provide our customers the best in local entertainment,â€ says Aguero. â€œWith the support of our regulars, plus the patronage of people who maybe have never visited our club, we can only hope to further improve upon our offerings.â€

â€œWe appreciate the opportunity to return to one of our favorite live music venues,â€ says drummer / founder Ed Rosado. â€œThe band is excited to be working with Kiki and look forward to a special night of music, friends and good times.â€

The night will also feature a special guest appearance by singer/songwriter Joel NuÃ±ez on guitar and vocals. Electric Piquete are self-described Latin funk fusionistas, perform regularly around South Florida and released their self-titled seven-song debut on CD and digitally in 2011.

ABOUT JADA COLES
Since 2009, this self-billed neighborhood bar nestled between the Brickell area and Coral Gables has provided drinks at great prices. There is never a cover and patrons can shoot pool, imbibe or just mingle in a casual, musically oriented atmosphere. Outdoor seating ample street and lot parking is available. Hours of operation are Monday â€“ Friday, 4 p.m. â€“ 3 a.m. and Saturday â€“ Sunday, 8 p.m. to 3 a.m. Happy hour specials and a food menu are available.

ABOUT ELECTRIC PIQUETE
The band has been together for more than four years performing at bars, clubs, private parties and music festivals throughout Miami-Dade, Broward and Monroe counties. Their sound can best be described as an all-instrumental mixture of rock, Latin, funk and jazz.

Named both “Best Latin Band” by the Miami New Times and a “Band of the Hour” in 2009 by Miami.com, Lexus thought enough of their unique sound to license their music for use in a promotional video. The Miami Herald featured one of their songs in a special Bay of Pigs 50th Anniversary report.