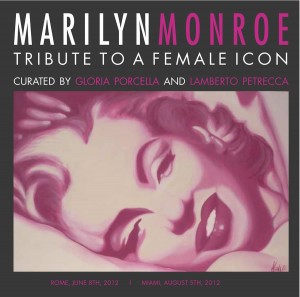 Through a symbolic relay with Italy and the U.S., on the dates that marked her life, the Galleria Ca â€˜dâ€™Oro dedicated the exhibition â€œMarilyn Monroe: Tribute to a Female Iconâ€ to the American actress

She seduced the world from the big screen and won a place in the hearts of exceptional artists. Fifty years after her death, Marilyn Monroe remains an icon for female excellence that continues to inspire the art world.

Through a symbolic relay with Italy and the U.S., on the dates that marked her life, the Galleria Ca â€˜dâ€™Oro dedicated the exhibition â€œMarilyn Monroe: Tribute to a Female Iconâ€ to the American actress.
Including a life-size Marilyn wearing a white dress immortalized by Seward Johnson in her most famous pose, an unusually lanky rendition by Valentina De Martini, a naked Marilyn immersed in color by Pablo Echaurren, and pop Interpretation by Ludmilla Radchenko alongside members of the Marilyn series produced by Andy Warhol and those constructed by Mimmo Rotella. The tribute to the legendary Marilyn comes to life in an 18-work exhibition that includes paintings, photographs, and sculptures.

The exhibitionâ€™s first stop was in Rome, in the historic Palazzo Wedekind in Piazza Colonna, only a few days after what would have been the stars 86th birthday, then the exposition heads to the Galleria Ca â€˜dâ€™Oro in Miami Florida, where the inauguration will be held on the date that marks the fiftieth anniversary of Marilynâ€™s death. For this symbolic reason curators Gloria Porcella and Lamberto Petrecca have chosen the months of June and August for the double launch for the exhibition.

June 8th: The exhibition kicked off in the nineteenth-century Palazzo Wedekind in Piazza Colonna with the arrival of Seward Johnsonâ€™s sculpture from the Croisette in Cannes, where it was exposed during the presentation of Simon Curtisâ€™ film â€œMy Week With Marilynâ€.

August 5th: The exhibition arrives in Miami where it will be hosted by the Galleria Ca â€˜dâ€™Oro in Coral Gables. Grand opening August 22nd.

The Artists In The Exhibition
Andy Warhol â€“ His serial reproduction of Marilynâ€™s face in the 60s transforms her into a â€œpopularâ€ icon.
Mimmo Rotella â€“ His series of dÃ©collage praises Hollywoodâ€™s brightest stars. Rottellaâ€™s works redefine the meaning of Marilynâ€™s death by constructing works pieced together with popular images of her life.
Seward Johnson – Considered among the most original artist of our time, Johnson is famous for his realistic, life-sized bronze sculptures that depict everyday characters absorbed in mundane activities. Of great visual impact and recognized for their ability to inspire amazement, his works include a Marilyn immortalized in one of her most famous poses.
Pablo Echaurren â€“ The works of Echaurren combine a variety of elements: the marked attention to miniaturized detail, the reference to the comic strip, and images of the natural universe. The exhibition presents a naked Marilyn immersed in an explosion of color that marks his signature style.
Renzo Nucara â€“ Founding member of the Cracking Art Group in 1993, Nucara chooses to work with plastic in order to make a statement on societyâ€™s commitment to the environment. His pieces reflect his research of Resinfilm, which consists of layers of resins, pigments, and natural and artificial objects, which become the skeleton of his most recent works of Statofilm.
Erika Calesini â€“ Irresistibly drawn to the expressive value of the subjects, Calesini creates works using discarded materials, such as bicycle part and inner tubes, rescuing them from their fate as landfill. Her process asks the audience to reflect of the value of objects and the part of them that is intrinsically attached to our lives.
Valentina De Martini â€“ The works of the talented artist exude elegance and charm, characteristics that are synonymous with the subject of Marilyn Monroe.
Camilla Ancilotto â€“ Totems that continuously mutate in appearance and color make up the works by Ancilotto. For the Roman artist art is a game with infinite representational possibilities.
Monica Casali â€“ Fresh from a recent exhibition at the Galleria Caâ€™ dâ€™Oro in Miami, Casali reveals a smiling, bright, and colorful Marilyn that is very much in accordance of the Warhol Style.
Cristiano Cascelli â€“ The acute portraits by Cascelli immortalize his subjects in a Pop style using a variety of techniques that showcase his unmistakable talent.
Florence Fabre â€“Fabre creates lively and captivating images. Her portraits consist of fragments of photographs that she reconstructs in order to offer a new perspective and give a new identity to her subject.
Fabio Ferrone Viola â€“ Ferrone exemplifies the Pop movement by depicting prevalent icons with his clever use of American soda cans.
Leonardo Hidalgo â€“ A native of Ecuador, Hidalgo has lived and worked for many years in the U.S., where he is considered one of the most effective and perceptive portrait artists of our time. Accomplished in a number of distinct techniques, such as painting, pastels, photography, and computer graphics, Hidalgo portrays his celebrated subjects using vibrant colors.
Massimo Lupoli â€“ Lupoli extrapolates objects and symbols of our everyday lives from their original contexts and places them in diverse setting that give them new significance. The work presented in the exhibition consists of a photograph superimposed on a stretch of the artistâ€™s brushes.
Flavia Mantovan â€“ The icons of our time are the undisputed protagonists of Mantovanâ€™s works. Characters whose faces almost liquefy under the color of cola and a stain that threatens to take over the breakdown symbolizes that everyone, including our celebrated stars, is doomed
Daria Paladino â€“ Trained in Rome and Paris, Paladinoâ€™s artistic trajectory carries her to the Lazio Pavilion at the 54th Venice Biennale in 2011. Her study focuses primarily on portraits.
Ludmilla Radchenko â€“ Radchenko references Pop Realism in her elaborate digital works, photos and scans, which are combined with a distinct material painting to create portraits of icons of contemporary life.
Marcello Reboani â€“ The portrait genre constitutes the leitmotif of Reboaniâ€™s artistic career. His works speak to the audience of the contemporary world through a parade of famous and anonymous faces, which allows him to further his investigation of human nature.
Fabiana Roscioli â€“ Renowned painter and photographer, she interprets the beauty of Marilyn in a succession of images depicting nude women.
Sasha Torrisi â€“ The versatile painter and musician (former singer and guitar player for the Italian band Timoria) uses a Pop Art technique that renders his favorite subjects in a particular light, in which they appear pure, smooth, florescent, and beyond any physical authenticity.

Galleria Caâ€™ dâ€™Oro, one of Romeâ€™s best known contemporary art galleries, is located in Piazza di Spagna overlooking the Spanish steps. It was established in 1970 by Antonio Porcella, son of Amadore Porcella, one of the most important art critics of the period and the grandson of Alpinolo Porcella, personal friend of great Italian Masters such as Filippo de Pisis and Giorgio de Chirico. Antonio Porcella is a current member of the de Chirico Foundation in Rome.

Todayâ€”four generations laterâ€”Gloria Porcella leads the gallery. Raised in Rome, Gloria studied at San Diego State University and has worked as a Councilor for the city of Rome where she was responsible for the Cultural Commission, was Head of the Culture Center in Rome, and worked with Italyâ€™s Environmental Minister. Over the years, Gloria Porcella with her business partner Lamberto Petrecca, and the help of Architect Silvia Zamarion has curated several important exhibitions in Italy and in the United States, including â€œOmaggio a de Chiricoâ€ in New York, Los Angeles and Miami, which had aegis of the UN, patronage of Italian and foreign Institutions; and the sensational first installation of the REgeneration Art Project in Syracuse, Italy during the G8 Environmental Summit.
In December 2010, during ArtBasel Miami, the Galleria Caâ€™ dâ€™Oro Miami opened its doors at 135 San Lorenzo Avenue in Coral Gables with the placement of the unforgettable pink snails, extending the REgeneration Art Project to the United States. Today the gallery continues to bring its experience and expertise to the US, promoting Italian and European art with passion and enthusiasm.