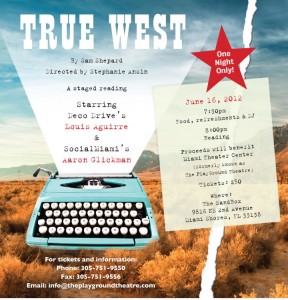 Deco Drive’s Louis Aguirre and SocialMiami’s Aaron Glickman will star in a benefit reading of Sam Shepard’s True West, directed by Stephanie Ansin. Presented by Miami Theater Center, formerly known as The PlayGround Theatre, the Pulitzer Prize-winning play is a tale of two estranged brothers who reconnect after five years. Aguirre and Glickman will perform key roles, Austin and Lee respectively. The production will also feature Howard Elfman in the role of film producer Saul Kimmer and Linda Bernhard as the brothersâ€™ mother. True West examines the relationship between the estranged brothers, Hollywood screenwriter Austin and drifter and thief Lee, who unexpectedly reconnect in their motherâ€™s home while she is away on vacation. It results in a battle of morals and wit, fueled by sibling rivalry. Tickets are $50 and benefit Miami Theater Center, the new home of The PlayGround Theatre. Reservations are suggested as seating is limited.