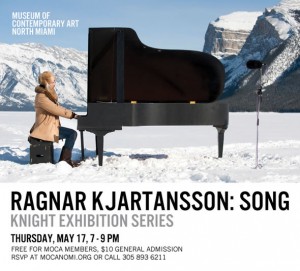 This exhibition was made possible with additional support provided by
MOCAâ€™s Mystery Dates fundraiser.
Ragnar Kjartansson: Song will be on view through September 2, 2012

MOCAâ€™s Knight Exhibition Series is made possible by the John S. and James L. Knight Foundation. Exhibitions and programs at MOCA are made possible through grants from the City of North Miami. Sponsored in part by the State of Florida, Department of State, the Florida Council on Arts and Culture, and the National Endowment for the Arts. With the support of the Miami-Dade County Department of Cultural Affairs and the Cultural Affairs Council, the Miami-Dade Mayor and Board of Commissioners. The Museum of Contemporary Art is accredited by the American Association of Museums.