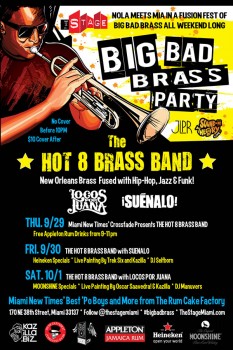 The Hot 8 Brass Band, a NOLA favorite, is most notably known for their contagious brass infused hip-hop, funk, and jazz and have toured internationally bringing their music and message to the masses. The Hot 8 Brass Band, like all of New Orleans, has had its share of tragedy in the aftermath of Katrina. Hot 8’s work with the Finding Our Folk Tour has brought music to evacuee shelters, temporary trailer parks, and to communities throughout the US that have provided a temporary home to displaced New Orleans’ families. Their efforts were featured on CNN, Nightline, New York Times, HBO and Spike Lee’s Katrina documentary “When the Levees Broke: A Requiem in Four Acts.” In addition to displacement caused by the storm and subsequent violence and uncertainty contained therein, drummer Dinerral Shavers was shot and killed in late 2006 while driving with his wife and child in New Orleans. In addition, two other members of the band have lost their lives due to violence on the city streets. In response to these tragic setbacks, The Hot 8 Brass Band uses their passion for music and social outreach led to an integral role contributing to the success of the Finding Our Folk Tour.

Don’t let the name fool you; The Rum Cake Factory creates some of the best Cajun food in town. Husband-wife owners and dynamic-duo Larry and Elena Robinson began catering in 2002 with Larry cooking the food he grew up with in Louisiana. The rum cake, his mother’s recipe, took on a life of its own and remains the signature item at the couple’s cozy little North Miami Beach shop. But we’re putting the dessert in front of the fine Cajun/soul-food specialties. Like fried shrimp or catfish in baskets or the same cleanly fried items in po’boys made on soft French bread shipped in from New Orleans. Fried turkey and pulled pork get stuffed into po’boys with their delicious rÃ©moulade sauce, and don’t miss the smoked chicken wings — crisp, mildly smoked, and juicy. Jambalaya and delectable barbecue ribs make it as blackboard specials during the week, and if you’re lucky, you’ll catch the peerless gumbo. More information at www.therumcakefactory.com. The Rum Cake Factory is located at 2075 NE 163rd St. in North Miami Beach.