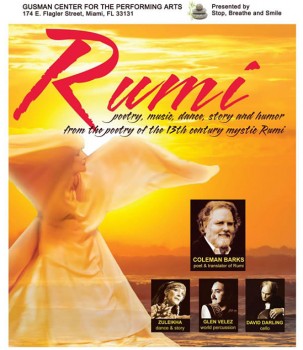 An uplifting performance from the heart! A remarkable ensemble of innovative artists celebrates the poetry of the 13th century mystic Rumi with an evening of story, music, dance and humor.

The Rumi Concert, a collaboration with 100 Thousand Poets for Change, is the largest poetry reading in history. Poets in 400 cities representing 90 countries are currently organizing the largest poetry reading in history with over 500 individual events scheduled to take place simultaneously on September 24th to promote environmental, social, and political change. Bob Holman and Margery Snyder, in a recent article on About.com said, â€œthe beauty of the concept of 100 Thousand Poets for Change is that it is completely decentralized and completely inclusive.â€

Coleman Barksis world-renowned for his translation and moving recitation of Rumi. His most recent volume, The Book of Love joins his best seller, The Essential Rumi, in touching the hearts of people from all walks of life. Jelaluddin Rumi, Sufi teacher, mystic and poet of lyrical spiritual power has become the most read poet in America, due in large part to the work of Coleman Barks.

ABOUT RUMI (1207-1273) was a teacher, mystic, founder of what we now know a “Whirling Dervishes,” and a poet of lyrical spiritual power. Born in Afghanistan, Rumi was teaching in Konya, Turkey in 1244 when he met the powerful spiritual seeker, Shams of Tabriz. Through his association with Shams, Rumi found a deeper level within himself that he called “The Friend.” Rumi created some 20,000 poems as oral extemporizations that were recorded by his students. He believed that prayer has a form and physical equivalent and that every thought has an expressive action. Many of his verses are fervent love poems, although the eroticism is a metaphor of the soul’s longing for God’s love.

ABOUT THE ARTISTS
COLEMAN BARKS
For thirty years the poet Coleman Barks has been collaborating with various Persian scholars to bring the poetry of Rumi and other mystic poets to the American public. This work has resulted in over eighteen volumes, leading to the best-selling Essential Rumi (HarperCollins, 1995), two hour-long appearances on Bill Moyers’ PBS specials, and inclusion in the prestigious Norton Anthology of World Masterpieces. Celebrating Rumi’s 800th birthday and coinciding with international celebrations of the event, Barks’ offering RUMI: BRIDGE TO THE SOUL (HarperOne; September 2007) is a beautiful collection of poems by the Sufi master. Barks taught poetry and creative writing in various universities for thirty-four years. He has published six volumes of his own poetry, most recently Tentmaking and Club: Granddaughter Poems (Maypop, 2001). His most recent publication (2010) is Rumi: The Big Red Book, the collected translations from Rumi’s Divan, sometimes called the THE SHAMS. He is now a retired Professor Emeritus of English from the University of Georgia in Athens. He received the Juliet Hollister Award (2004) for his work in the interfaith area. His Rumi translations have sold over half a million copies worldwide and have touched the hearts of people from all walks of life. Barks and Zuleikha have maintained an ongoing collaboration on the Rumi Concert for a number of years. www.colemanbarks.com.

DAVID DARLING
World renowned, classically trained cellist and composer David Darling celebrates the human spirit through his provocative, eclectic music. David spent the early part of his career touring the world with the Paul Winter Consort. He has performed with, among others, Bobby McFerrin, SpyroGyra, Peter Kater, R. Carlos Nakai and the late Joseph Campbell. Referred to as the “Maverick” cellist, Darling is known for his playfulness and improvisational skills and he is thought by many to have redefined the way the cello is played. He has over fifty album and screen credits as soloist and in collaboration with other groups and musicians and his credits include the 2010 Grammy Award for best “New Age Album.” www.daviddarling.com.

ZULEIKHA
From the sparkling essence of the ancient wellspring, legendary performance artist and Storydancer, Zuleikha is a whirlwind of spirit, rhythm, dance and stories of nature, world lore and life itself. KsenijaHorvat of the Edinburgh Guide describes Zuleikha as “a singular figure on the horizon of sacred theater and dance, a mistress of countless faces, who moves effortlessly through space.” Zuleikha was trained with master teachers in different world lineages, including American avant-garde dance, Indian Kathak, classical music of Afghanistan, and Balinese and Japanese Dance. She has developed her own contemporary movement technology based in traditional music and movement languages of east and west. Zuleikha uplifts theater audiences with her very funny, soul-stirring solo performances and collaborates with world musicians and poets, including the late African drum master Baba Olatungi, jazz guitarist Bruce Dunlap, cellist David Darling, vocalist/instrumentalist Jai Uttal, world percussionist Glen Velez, composer/cellist, Eugene Friesen, avant-garde composer/pianist Terry Riley, and Coleman Barks, poet and translator of Rumi. Founder and Director of The Storydancer Project, Zuleikha is the 2005, recipient of the prestigious Humanitarian Award from Pediatric Nursing Journal, for her global work with women and children and the 2010 Annual Award of Appreciation from the Images and Voices of Hope Summit for her outstanding work in promoting positive personal and social change. www.storydancer.com.

Stop, Breathe and Smile is a journey into the Mystery, to the cutting edge of reality and the evolution of the human species. We explore the known and unknown, in the areas of science, spirituality, and expression. We share our experiences through the promotion and production of a myriad of events dedicated to Truth, Beauty and Oneness. Through this, we create a welcome zone in South Florida for those seeking to embrace a new universal awareness.