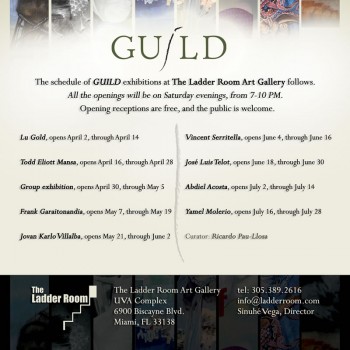 A new group of eight artists, GUILD, will be having solo exhibitions at the Ladder Room Gallery, located at Biscayne Blvd. and 69th Street, in Miami’s MiMo district. Each exhibition will run approximately two weeks. The invitation with schedules is attached. The first opening is on Saturday, April 2nd.

As their group name suggests, GUILD places strong emphasis on craft and ideas. They recover concepts from various movements within Modernist art which beckon further exploration, while pursuing new horizons in painting.

I am sure you will enjoy being part of the emergence of this exciting new group in Miami’s cultural landscape.

In a bold move, The Ladder Room Art Gallery is dedicating the next four months to launching an eight-artist group that has recently emerged in South Florida. GUILD consists of painters who reconnect with artâ€™s long-standing traditions, and gladly embrace concepts of originality and craftsmanship which have been derided by trends of the last couple of decades.

The painters of GUILD are: Abdiel Acosta, Frank Garaitonandia, Lu Gold, Todd Eliott Mansa, Yamel Molerio, Vincent Serritella, JosÃ© Telot, and Jovan Karlo Villalba. All currently live in South Florida, except for Serritella who now lives in Oakland, CA. All of GUILDâ€™s artists are Miamians and graduates from The New World School of the Arts, where many first met and established friendships and common cause, before going on to pursue degrees in fine arts at various universities. The group had gathered loosely and had begun exhibiting irregularly. However, it has recently formed into a focused association at the instigation of art critic and poet, Ricardo Pau-Llosa, who first encountered their work last December at a Little Havana exhibition space they had rented to show their work during Art Basel week. Pau-Llosa was taken by the groupâ€™s diversity, passion, and the high quality of their work. He is the curator of these exhibitions at The Ladder Room Art Gallery and wr
ote the essay which appears in the groupâ€™s first catalogue.

GUILDâ€™s artists have defined their unifying ideas and mission in a ten-point statement, which is attached. The group is conscious of the irony implicit in their position as rebels who seek to move Art forward precisely by not abandoning craftsmanship, the cult of originality, and other traditions which are central to Western art, and last extolled in Modernism. As Pau-Llosa points out in his essay, GUILD is part of a broader generational awareness which he terms â€œRenewal Modernismâ€ and which has taken a new look at ideas within this compendium of styles which are full of promise for future innovation. GUILD, Pau-Llosa affirms, is aware that the old linear narrative of stylistic novelty, derailed by Post-Modernist theorists and artists, has ironically led many younger artists back to Modernism itself to recover avenues of thought which the market-driven rush to new art had abandoned prematurely.

The schedule of GUILD exhibitions at The Ladder Room Art Gallery follows. All the openings will be on Saturday evenings, from 7-10 PM. Opening receptions are free, and the public is welcome.

GUILD is a group of individual artists who affirm:
1) that Art is Alive and well and always will be.
2) that Art thrives on the power of time-honored skills and the belief in the originality of the individual artist.
3) that the work of Art cannot be reduced to a message, and that while Art can broach any subject, it cannot help but be transcendent, ambiguous, and essentially enigmatic.
4) that Art which denies skill, originality, and ambiguity is just a one-line joke, a transparent screed, or yet another pathetic and anachronistic attempt to shockâ€”but who?, we wonder.
5) that because Art is never about the individual artistâ€”however confessional it might appear to beâ€”the appreciation of its merits should always resist the cult of personality. The work of Art stands alone, as often the artist too must stand alone.
6) that the business of Art is a laudable and meritorious contributor to the artistâ€™s wellbeing and the life of our culture, provided it is based on rewarding merit.
7) that as individuals and as artists we are indebted to the pastâ€”manifested in the history of Art as well as in the particular cultural legacies we have inherited and absorbed as individualsâ€”but that we pay back that debt by making the past live in the transformative and innovative power of our work. We honor the past but do not live in it. We seek the new but are not slaves of novelty.
8) that Art without Ideas is worthless.
9) that life without Art results in slaveryâ€”to states, slogans, greed, and other symptoms of the refusal to reflect actively in the course of everyday existence.
10) that we capitalize the first letter of the word Art to honor its importance in our lives as artists and in the Western tradition to which we belong.