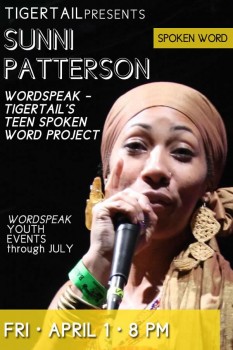 Words are powerful tools for self-expression and for changing the world. New Orleans-based (from the lower Ninth Ward), African-American performer and award-winning poet Sunni Patterson brings a warm spirit, stirring lyrics and passionate performance to her work. WordSpeak, a project for teens, includes workshops, slams and performances. Sunni has been featured at HBO’s Russell Simmons Presents Def Poetry and worked with well-known artists and performers including Hannibal Lokumbe, Kalamu Ya Salaam, Sonia Sanchez, Wanda Coleman, and Amiri Baraka, among others. Sunni Patterson comes to Miami to launch the sixth year of Tigertail’s WordSpeak, an ongoing spoken word program for South Florida teens. Sunni will be in Miami from March 28 – April 1, 2011 for a residency that includes school and community-based workshops and readings.