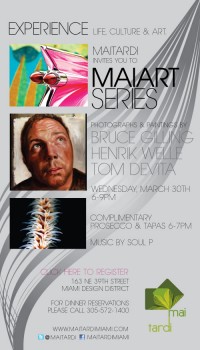 On March 30th, Maitardi hosts its fifth MaiArt event with artists Henrik Welle, Bruce Gilling and Tom De Vita. Though with very different approaches to their subjects, all three artists work with light and colors in their pieces exploring emotional and visual contrasts and forms. Guests enjoy complimentary Prosecco and tapas from 6 to 7pm and music by Soul P until 9pm.

Henrik Welle, an avid diver and passionate about everything related to water, shares his underwater experiences through photography. Born in Germany and now living in Miami, Henrikâ€™s work showcases natureâ€™s creation up-close with its strange yet hypnotizing structures, forms and colors. â€œIn a way most people will never see it otherwise,â€ comments Henrik. He chose media photography over film for the basic reason of capturing a moment and freezing it in time. â€œA photo can create an emotion, a feeling and inspire your imagination whenever you gaze at it,â€ Henrik adds.

Tom De Vita was born and raised in Queens, New York and currently owns his own De Vita Studio, an art and design company that creates murals and fine art, while teaching at the Art Institute of Forth Lauderdale, Barry University and Broward College. The essence of his work is based on â€œsea of visual noiseâ€ where he wants to force multiple readings of images and the deconstruction of their meanings. â€œWe inherited our contemporary way of seeing, but I wanted to still preserve my conviction towards painting in the grand tradition of figuration,â€ De Vita explains.

England-born Bruce Gilling has been said to master the essence of photography. He projects intensity through spectacular angles, bright utopic colors and shadowing. His subjects are people, places and animals captured in such a way each picture transports the viewer into a whimsical world where perfection of movement, color and light is undeniable.

Aprilâ€™s MaiArt event will bring Michele Palmisano and Alex Heria. Michele is part of the Graspa Group family and his pieces focus on light and movement of elements like water as well as manipulations of plexiglass photography. Alex is a nationally recognized artist whose work has been exhibited in Miami, New York and Spain. MaiArt is scheduled for Wednesday April 27th at 6pm.

Located in the oak-shaded plaza corner of NE 2nd avenue and 39th Street (163 NE 39th Street), also known as the heart of the Miami Design District, the risto-bar, a European concept combining ristorante and bar, opened Fall 2009. Maitardiâ€™s experience rests on a casual, outdoors and sociable ambiance, delicious tapas meant for sharing and friendly and professional service. The location has retained its architectural design with the floor to ceiling leaf-mosaic faÃ§ade along with the native oak trees throughout the patio giving it an irresistible appeal to relax, catch up on work or a book, hang out with friends for happy hour or lunch with a client. Complimentary Wi-Fi and outside bar available.