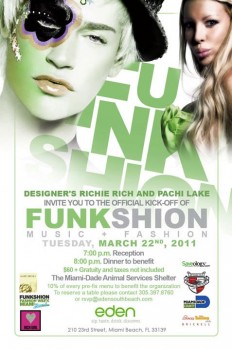 Eden will be creating a tantalizing 3 course menu. 10% of each pre-fix menu sold will benefit this Miami-Dade Animal Services. The Press and Media are invited to attend a reception beginning at 7:00 p.m. and to recieve their FUNKSHION badges for the entire week.

“The VILLIONAIRE Collection is sort of a 1920’s-1930’s glamour meets East Village,” says Richie Rich, “Imagine if Marie Antoinette fell out of the sky and landed in the middle of the East Village. We’re just going to let her be glamorous and have fun!” …… “And SEXXY POP,” says Pachi, “Is a night where your most devilish dreams become reality.”

The official launch of Richie’s new single FOP, meaning, FASHION POP: A dazzling beat to move your feet from the VILLIONAIRE Album will make its worldwide debut during the VILLIONAIRE Fashion Show.

Richie Rich and Pachi Lake have been designing collections for the past three years and have produced and designed over 15 shows together. Now with the launch of their collection in Latin America, their success upon the Runways of Miami and New York and their global recognition, in 2011, they are excited to be back In Miami and help to such an important organization as The Miami Dade Animals Services.