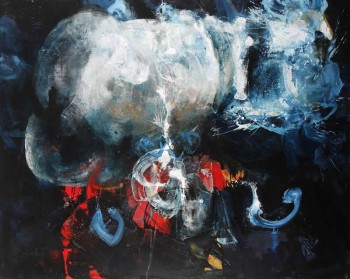 Walbert Perez is an artist who faces painting with dedication bust also with passion, as you can perceive in the saturated and powerful surfaces of his canvas.
Walbert has a history of more than 15 years in the painting. He has participated in about 30 collective exhibitions and performed 11 solos. Within his international route are: the Gallery of the Inter-American Bank of Development (BID) (2009); Borderless Generation-Contemporary art from Latin-America (2009); Korea Foundation Cultural Center, Seoul (2008), international art fair, ArteBa, Buenos Aires (2010) among others.
In his most recent work called “implosion”, Walbert burst from abstractionism with unusual impetus on intolerance and indifference linked to politics and violence in Colombia. Huge black backgrounds as dark as the silence and the uncertain of the country, target surfaces with timid colors and large white outbursts “implosiones” evoke a break, a recollection inwards, what could perhaps be the only hope against a very dark background: the reflection.
The work of Walbert Perez is a new path of the plastic from the Colombian Caribbean