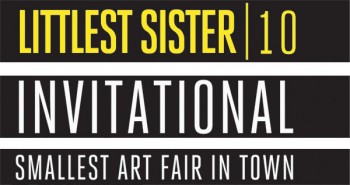 Invitational Art Fair has returned for its third edition. LITTLEST SISTER is a fragment of the explosive satellite art fair phenomena; exploring the “booth” as a venue to exhibit and sell art.

Since 2002, the glamorous art typhoon – Art Basel Miami Beach, takes place every December in sunny Florida. Located in Miami Beach, the international fair is the American “sister” event of Art Basel in Switzerland, the most important annual art show worldwide for the past 39 years. Eight years later, the effects of Art Basel Miami Beach spawned 20+ “satellite” art fairs throughout Miami, housing 1100+ galleries and alternative spaces from around the world.

If you’re looking to find small diamonds in the rough, look no further. Art Basel Miami Beach finds her baby sibling at Spinello Gallery. LITTLEST SISTER is the Design District’s only art fair, across the ocean from Art Basel, Design Miami, and NADA, and coinciding with Art Miami, Pulse, and Scope.

The art fair consists of 8 booths, all 4′ x 8′ in size. The scaled down booths uniquely house over 40 of today’s most provocative artists ranging from unknown artists, up-and-coming art stars, to seasoned veterans, curated by Art Fair Founder Anthony Spinello.

This year LITTLEST SISTER will house a VIP Project Room featuring a solo project, “Observations,” by master painter Marc Dennis. Dennis’ hypernaturalistic, highly detailed and obsessively delineated paintings address the changing relationship between natural and unnatural phenomena. In this show he explores the subversive potential of beauty, referencing traditional still life painting while distilling something otherworldly from within nature’s beneficence. The VIP Project Room will be conveniently dressed with an extensive selection of art publications and Cafe, ideal to converge, lounge, and unwind.

The Littlest Sculpture Project, a new highlight, will deck the halls with innovative sculptures that accentuate the fair’s overall concept. Works by: Pablo Cano, Eric Doeringer, and Pachi Giustinian.