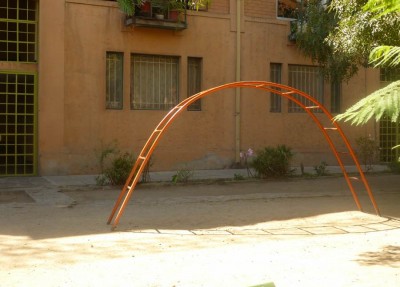 Opening Friday July 9 at 6pm : Fabienne Lasserre “What is Found There”
Gallery Diet is pleased to announce the first Miami solo exhibition by New York based artist, Fabienne Lasserre. In the below email to gallery director, Nina Johnson, the artist describes the origins of the project, which will consist predominantly of sculpture.

“The title of the show, ‘What Is Found There’, is taken from a collection of essays by Adrienne Rich, in which she talks about the intersections of poetry and politics. An important part of my work is premised on the possibility of translating political notions within abstract(ed), formal language. Most of these pieces were developed during two artist residencies at La Curtiduria, Oaxaca, Mexico, and in New York in my studio. In Mexico I worked with a weaver from Teotiltan del Valle, a village 30km from Oaxaca, to produce felt, later assembled in sculptural pieces. The pieces develop through accumulated and contradictory pressures: pressures of gravity, of context, of the body, of will, of desire. Working between Mexico and New York, teaching in Baltimore, I am forced to adapt to different rhythms, materials and contexts. I opt for unplanned gestures and accept a meandering, wandering course. Doubt is an intuitive self-discipline: a type of speculation and an acceptance of fallibility rather than a form of mistrust. Uncertainty is productive. I choose materials that allow me to consider the visible through the tactile, and vice-versa. They tend to have an indistinct, malleable structure. This has a political dimension. Felt, for instance, is non-hierarchical: no part has a specialized role, dominates or leads. Paint is also liminal. It is fluid and solid, simultaneously matter and illusion. The importance of fluidity, irresolution, the body, and the sense of touch in my work reflect an approach to making that is indebted to feminist thought and art practice.”

Fabienne will be the 15th artist to participate in Gallery Dietâ€™s invitational series of programming which brings artist from around the world into Miami for solo and two-person exhibitions. Previous artist in the series have included Graham Hudson, JJ PEET, Kristopher Benedict, Empfangshalle, Bridget Baker, and various others. In addition to the invitational series, Diet represents five emerging artists including Charley Friedman, Christy Gast, Richard HÃ¶glund, Abby Manock, and Daniel Milewski.