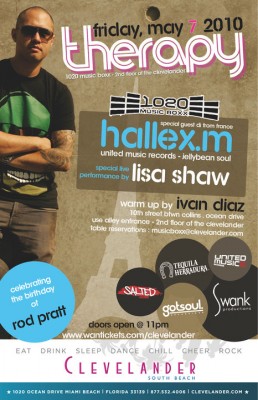 HALLEX.M – In terms of the house sound rooted in NYC tradition, Hallex.M is without a doubt amongst the top DJs, producers and promoters out of France since 1996.

LISA SHAW – Her warm, sexy vocals have graced many a house music track, but Lisa Shaw’s name is still fairly obscure. She’s a “house diva” – owner of an anonymous voice that soars above crowded dancefloors at 2 a.m., enchanting listeners, only to disappear a few minutes later. Anyone who’s ever gone clubbing has probably heard her – probably more than once. Shaw is nearly ubiquitous in the house music scene. She’s collaborated with many famous producers, and has appeared on countless compilations. And finally, in 2001, she began to make tentative steps toward the spotlight.

In 2009, Lisa brings you her second album “Free” being released on Salted Music. “FREE” showcases Lisa’s illustrious voice through a well crafted journey of soulful vibes and bouncy gems, with producers Dave Warrin, Miguel Migs, and Tim K keeping it moving. New House-Classics “Feel” and “All Night High” are supported by chill-inducing down-tempovbeauties like “Better Days”, “Honey”, and new Dance-Floor stompers “Music In You” and “Like I Want To.”

Lisa Shaw has been a proven staple in the deep house world. She helped define an era with her releases on Naked Music, and continues to create timeless gems.”FREE” takes it back to the basics, while “sweet and simply” taking it beyond.

IVAN DIAZ – Local Miami secret has been hidden and flying under the radar for the last couple of years. This 25th Anniversary of WMC definitely brought out the “IVAN” in Ivan and showcased the best in a showman behind the controls of the deepest,dirties, most funky and afronic beats. Ivan is set to take over not only his little world but yours too…he’s a ‘don’t miss’, not to miss !!!!