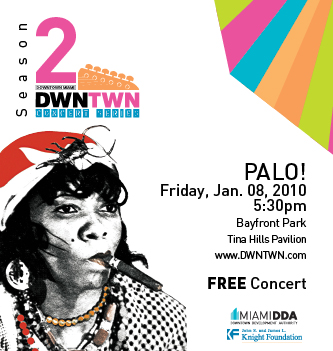 January 8, 2010 @ 5:30pm
We are kicking off the New Year with some funk. Friday, January 8, 2010 at 5:30 pm the DWNTWN Miami Concert Series is presenting the Miami based band PALO! Their unique and infectious style, textured with exciting beats from the tropics and a touch of some serious jazz, will have the crowd dancing the night away at this free concert at Bayfront Park’s Tina Hills Pavilion.
The New York Post raves”Afro-Cuban Funk is Cuban music for the new generation. And the leader of the sound is the Miami based band PALO!”
As always the show is a sunset happy hour and food and drinks are available.

For information on this show and the rest of the season go to the concert series website… or… become a fan of the series on Facebook …or … text DWNTWNR to 878787 for up to the minute updates.