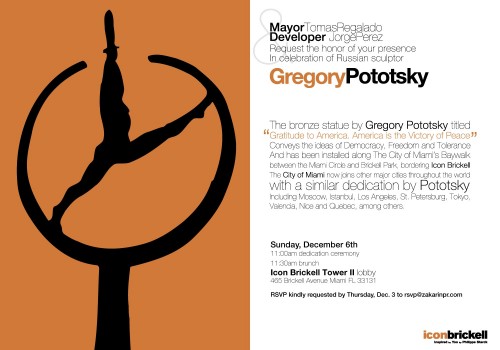 In celebration of Russian sculptor Gregory Pototsky, Mayor Tomas Regalado and Developer Jorge Perez are hosting an intimate dedication ceremony for Pototskyâ€™s symbolic statue to the City of Miami. Taking place on the final day of Art Basel, the ceremony will begin promptly at 11am on Sunday, Dec. 6 on the bay in front of Icon Brickell, followed by brunch in the lobby of Tower II.

The bronze statue titled “Gratitude to America. America is the Victory of Peace” conveys the ideas of democracy, freedom and tolerance, and has been installed along The City of Miamiâ€™s Baywalk, between the Miami Circle and Brickell Park, bordering Icon Brickell. The City of Miami now joins other major cities throughout the world with a similar dedication by Pototsky, including Moscow, Istanbul, Los Angeles, St. Petersburg, Tokyo, Valencia, Nice and Quebec, among others.
Kindly send your confirmation to rsvp@zakarinpr.com.
Icon Brickell
485 Brickell Avenue
Sunday, December 6 at 11:00 AM sharp