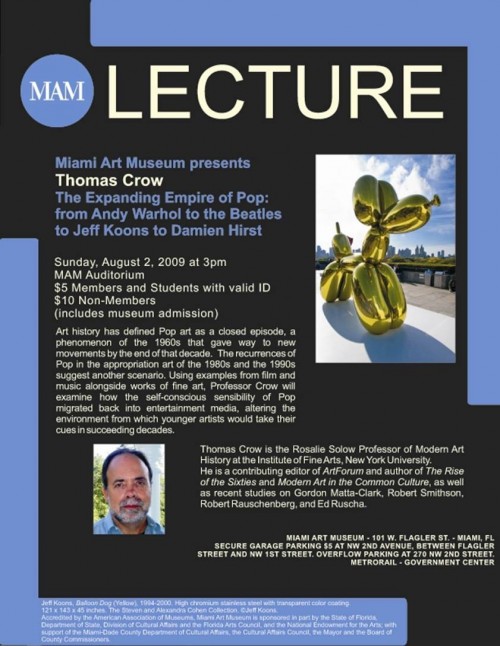 Miami Art Museum presents Pop Art expert and enthusiast Thomas Crow in a lecture entitled The Expanding Empire of Pop: from Andy Warhol to the Beatles to Jeff Koons to Damien Hirst on Sunday, August 2, 2009 at 3pm to be held at the MAM auditorium.

Using examples from film and music alongside works of fine art, Crow will examine how the self-conscious sensibility of Pop migrated back into entertainment media, altering the environment from which younger artists would take their cues in succeeding decades.

Crow is a contributing editor of Art Forum Magazine and author of The Rise of the Sixties and Modern Art in the Common Culture. Crow serves as the Rosalie Solow Professor of Modern Art History at the Institute of Fine Arts at New York University. He is the recipient of many honors and awards, including the Eric Mitchell Prize for the best first book in the history of art and being named the Durning-Lawrence Lecturer at University College, London.
Admission: $10 Non-members and $5 MAM members and students with valid ID
Miami Art Museum is located at 101 West Flagler Street, Miami, FL 33130
# # #
Miami Art Museum
Miami Art Museum serves one of the most diverse and fast-growing regions of the country, where a confluence of North and Latin American cultures adds vibrancy and texture to the civic landscape. MAM embraces its role as a cultural anchor and touchstone in a city that welcomes countless ethnic and age groups, lifestyles and ideas.