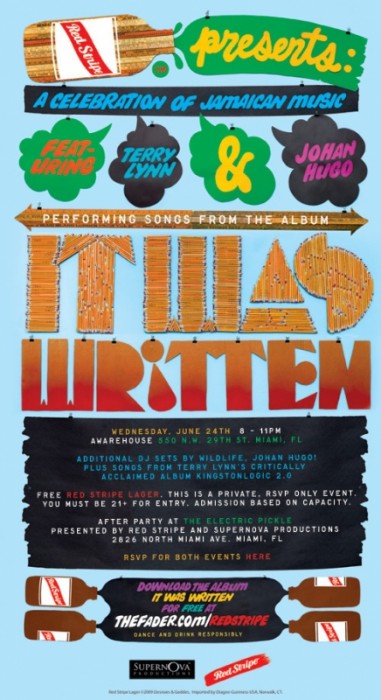 Free Red Stripe Lager
This is a private, RSVP only event. You must be 21+ for entry.
Admission Based On Capacity.

After party at The Electric Pickle presented by Red Stripe

2826 North Miami Ave. Miami, FL
Download the album “It Was Written” for free

The makers of Red StripeÂ® lager, brewed in Jamaica and known around the world, today announced the up coming release of It Was Written, featuring DJ/production aficionado Johan Hugo and Kingston, Jamaica-based emerging artist Terry Lynn.

The five original musical tracks that compose the release were commissioned by the brewers of Red Stripe to celebrate the worldwide influence, importance and appeal of the rhythms and pulse of Jamaican music.