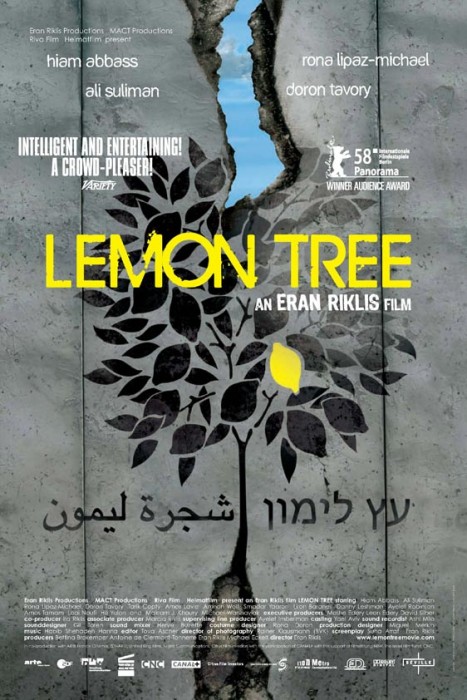 Salma, a Palestinian widow, has to stand up against her new neighbor, the Israeli Defense Minister, when he moves into his new house opposite her lemon grove, on the green line border between Israel and the West Bank. The Israeli security forces are quick to declare that Salma’s trees pose a threat to the Minister’s safety and issue orders to uproot them. Together with Ziad Daud, her young Palestinian lawyer, Salma goes all the way to the Israeli Supreme Court to try and save her trees. Her struggle raises the interest of Mira Navon, the Defense minister’s wife. Despite their differences and the borders between them the two women develop an invisible bond, while forbidden ties grow stronger between Salma and Ziad. In Arabic, Hebrew, French, with English subtitles.
WINNER: Best Actress Hiam Abbass Israeli Film Academy Awards
Audience Award Berlin Film Festival
â€œThe rare ability to make INTELLIGENT, ENTERTAINING CINEMA from hot-button issues is illustrated beautifully in Lemon Tree…a multifaceted drama straddling the Palestinian-Israeli Chasm. . .an outstanding performance from Hiam Abbassâ€
-Variety
For tickets click HERE