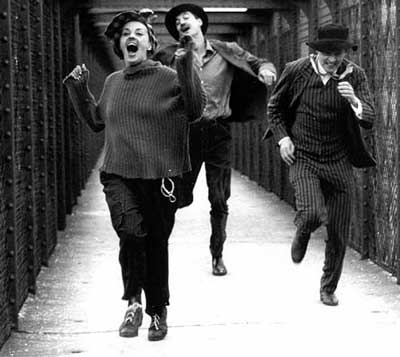 Hailed as one of the finest films ever made, legendary director FranÃ§ois Truffaut’s early masterpiece Jules and Jim charts the relationship between two friends and the object of their mutual obsession over the course of twenty-five years. Jeanne Moreau stars as Catherine, the alluring and willful young woman whose enigmatic smile and passionate nature lure Jules (Oskar Werner) and Jim (Henri Serre) into one of cinema’s most captivating romantic triangles. An exuberant and poignant meditation on freedom, loyalty, and the fortitude of love, Jules and Jim was a worldwide smash upon its release in 1962 and remains as audacious and entrancing today.
In French with English subtitles.
WINNER: Best European film Bodil Film Awards
Best Director Mara Del Plata Film Festival
â€œWhen FranÃ§ois Truffaut was a twenty-three-year-old film critic, in 1955, he read a
first novel by a seventy-four-year-old writer, Henri-Pierre RochÃ©. â€œThe book overwhelmed me,â€ he later recalled, â€œand I wrote: If I ever succeed in making films,
I will make Jules and Jim.â€-John Powers
For tickets click HERE