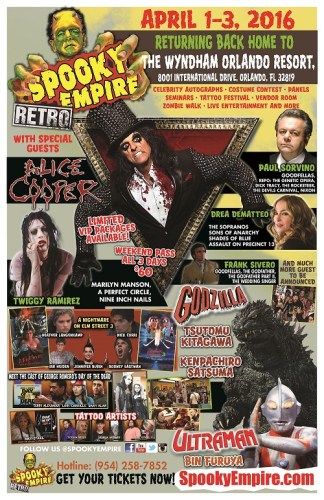 Spooky Empire, who hosts the â€˜Ultimate Horror Weekendâ€™, one of the largest horror conventions in the nation every October, returns by popular demand, to its old stomping grounds for their mid-season convention on April 1 – 3, 2016 at The Wyndham Orlando Resort. The annual weekend event will feature an array of activities including celebrity autographs with meet & greets, Q&Aâ€™s led by special guests, and a tattoo festival with more than 25+ artists such as renowned tattoo artists from Ink Master on hand to tattoo eager guests. The weekend will also include a pre-con retro party on Thursday night, with music, movies, and more, plus after-hours events for paid attendees on Friday and Saturday, all taking place at Gatorville poolside. Expected celebrity guests include megastar and shock rocker Alice Cooper; the cast of Weird Science: Anthony Michael Hall, Ilan Mitchell-Smith and Kelly LeBrock; Drea de Matteo from The Sopranos, Sons of Anarchy, and Shades of Blue; Paul Sorvino from Goodfellas and Repo: The Genetic Opera; Godzilla actor and stunt performer Tsutomu Kitagawa; the Dream Warriors from A Nightmare on Elm Street and many more. Purchase tickets in advance as prices increase at the door.