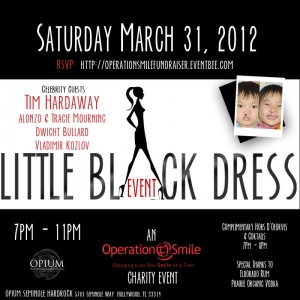 This fundraiser and cocktail event will be held at the beautiful Opium at The Seminole Hard Rock Hotel & Casino in Hollywood, Florida, March 31, 2012 at 7pm. This year, we will be dedicating the night to the Operation Smile mission in Africa, Operation Smile South Africa. Medical volunteers provide free, safe and effective reconstructive surgery for children born with facial deformities such as cleft lip and cleft palate throughout Southern and Central Africa, as well as educational and training opportunities that promote sustainability and self-sufficiency throughout the region. Graced with unequivocal elegance and class, Opium, designed with an exotic and cultural vibe, will accent the theme of this year’s event.

Supporters and guest speakers attending the event will include our celebrity guest, Miami Heat great and 2012 Nominee of the NBA Hall of Fame, Tim Hardaway, who has also been a strong supporter in his annual attendance of this event. This year he will be bringing some of his friends along to support!

Alonzo Mourning along with his wife Tracy Wilson Mourning, former WWE wrestler Vladimir Kozlov, and superior leader and community activist, Representative of District 118, Dwight Bullard will also attend in support. Plastic surgeon and annual supporter, Dr. Authur who will speak on behalf of his experiences as an Operation Smile volunteer. Included in this black tie event will be the highly anticipated “Little Black Dress” fashion showcase coordinated by New York Fashion Week extrordinaire and stylist to the stars, Chicago’s very own Reginald Wood. Edgy performance vignettes brought to you from South Africa will conclude the night.

Complimentary catering and cocktails from 7pm – 8pm served by the true gold of Guyana, Eldorado Rum; and Food & Wine Magazine’s ‘Best New Vodka’ of 2009, gluten-free, Prairie Organic Vodka.
Silent auctions, raffles and donations during the event will support the efforts of raising funds for the organization. The eventâ€™s goal is to raise much needed funds for volunteer surgeons to provide surgery to children suffering from this upper lip deformity.

Your attendance will be such an honor to not only the foundation, but also for others to see the sincere effort of your support in helping to heal children all over the world. A portion of your ticket sale will go to the foundation.