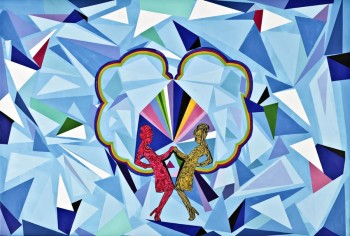 The solo-exhibition, made up of 28 works, will be on display from November 3 to November 20 with an opening reception on November 3, and presented during Novemberâ€™s Second Saturday Gallery Walk on November 12.

â€œConscious Paintingâ€ made its European debut in Paris in the Cappelini showroom and Atelier 7 (Picassoâ€™s workroom in 1912) with rave reviews. His Rhythmic Paintings exhibit in Miami last year, which was well-received by art critics, helped catapult O. Ascanio Gallery to be among the more respected galleries in Wynwood.

Cabeza, who is Paris-based and whose works were featured in Capelliniâ€™s retrospective catalog titled: â€œThis is Not a Catalog, This is Historyâ€, said that this collection is much more â€œintimateâ€ than past works.

â€œI insisted on working with less complicated dimensions and a much slower conscious creative process that spanned a year,â€ said Cabeza. â€œI was working in a dimension of realization that lies between the mind and the interactive world.â€

Precious a 32â€ x 42â€ black and white painting made up of ebbless sequential patterns, depicts a womanâ€™s bust wrapped in a fur. Similar to other pieces in this collection, the feminine form is provocative and her look is piercing. In the aptly named Kaleidescope, Cabeza uses a kaleidoscopic burst of vivid colors and angles to frame symmetrical female silhouettes reminiscent of 60s style.