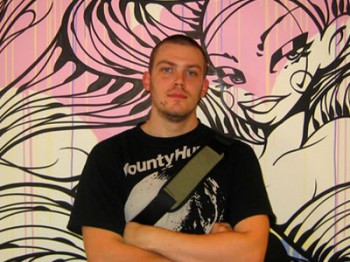 Subversive social commentary is increasingly gaining visibility in the world of street art. Talented artists are manipulating household items to engage people through every day experiences. In 2009, Primary Flight, in partnership with CPOP gallery, erected a series of re-branded food and beverage street signs near fast food eateries to call attention to obesity and related issues.

This year, CPOP with Trusto Corp, whose mission is â€œdedicated to highlighting the hypocrisy and hilarity of human behavior through sarcasm and satire,â€ will produce an interactive circus in Cafeinaâ€™s garden. Common products, brands and games will be given new life and meaning under Trusto Corpâ€™s warped, artful eyes.

New Image Gallery, the Los Angeles group credited for mobilizing the careers of Shepard Fairey, Jo Jackson, BÃ¤st and Barry McGee, will be adopting Cafeinaâ€™s exhibition space which will be open to the public December 1 to 5, 2010 during regular daytime hours. After dark, anticipate surprise celebrity DJ and musical guests. For more information visit www.cafeinamiami.com.